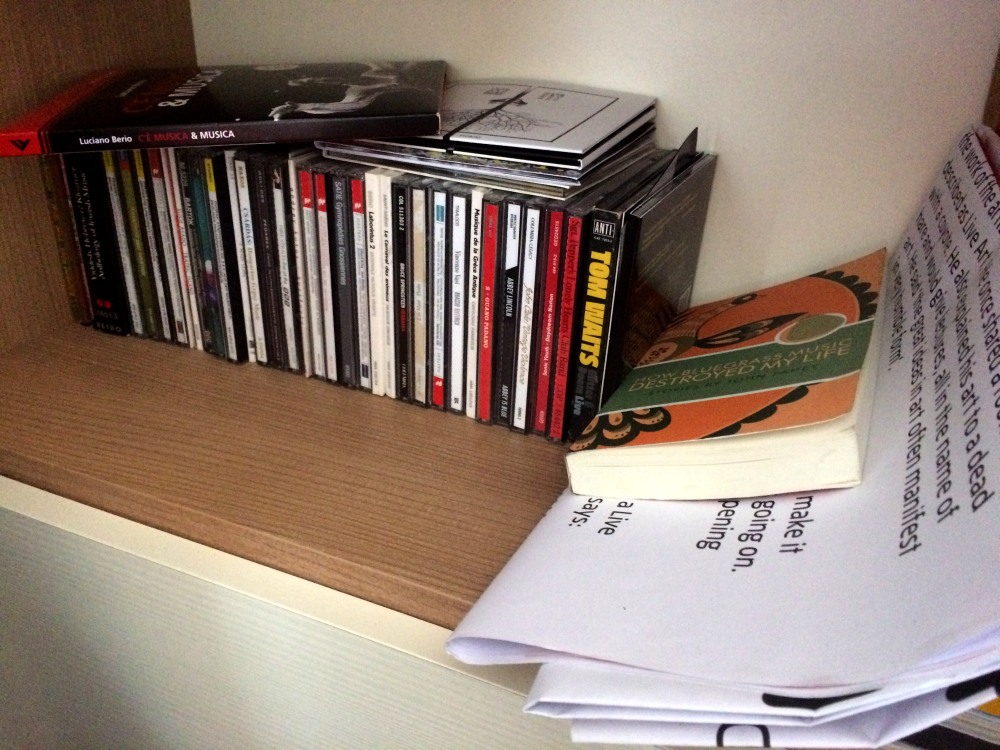 What’s that book “How Bluegrass Music Destroyed My Life”? Are you influenced by Appalachian music, or blues in general? Listening to your tracks, I can say yes… what do you find in common in the spirit of black people of those places and you, now?

“How bluegrass music destroyed my life” it’s the first book written by John Fahey, one of the most influential guitar players of all time. This is a proto-biography, full of super funny anecdotes and stories that shine a light on his figure, which is extremely interesting in my opinion. Well, I’ve been studying blues music for a while now and for me that means pre-war blues, I’m not interested in the 60s/70s wave of “blues legends” as I don’t like acrobatic finger picking. It would be anachronistic to try to find a direct connection between those people and me, but still, there’s the need to express oneself. I know this could sound naïf, but take Elizabeth Cotton for example: she became famous in her 50s I think, she wasn’t an entertainer as many others were in order to make a living out of their music, she played the guitar upside-down creating perfect and absurd melodies and she sang in a very a peculiar way. If you go on YouTube and search for one of the latest versions of “Freight Train” you’ll find out what I’m looking for in music (and I hope to remain in this quest for a very long time). Changing few elements in guitar playing without anyone noticing it, that’s what those guys did.

Amazing. So, she’s left-handed but she plays the guitar upside-down? Right? I never heard of her, but it’s a nice discover. Thanks. I by the way keep wondering why you’re so into USA music and culture. I remember those nice pictures of the ‘Misses’ in your first album as McGuffin Electric… and there’s also that weird (but very cool) sample from “The Good, the Bad and the Ugly” movie in the record. But in French! Could you explain to me these ‘international’ aspects of your music?

Amazing, right? Well, I’m glad you remember “Merde, il pleut”. In that album I wanted to create a sort of global, double-faced universe in which you can find the misses you’re talking about, but on the cover there’s also a picture of an Italian partisan who is eating in the snow. I put the sample from “Le Bon, la Brute et le Truand” in because it sounds like something familiar, but at the same time absolutely far from what anyone already knows. Plus, languages can carry meaning and sound which are simply better in evoking what I’d like to evoke (I don’t sing, I only have titles to create a frame for my pieces). I’ve always been interested in other cultures and languages, maybe because I’m not a professional musician, but a linguist-in-training, that’s why I choose titles in the language I think appropriate for a certain piece. I think that my love for American music is due to the fact that USA culture is at once familiar and distant to mine, as I said before, something important for me. I also love music from other cultures and I try to mix words, stories and sounds without thinking about where they come from, but I am an European musician, and I think you can tell it from what I do. Still, my new album is based on a (wonderful) Haitian romance, to evoke monsters that are not very well known here, but also to show how they’re all very similar to “ours”, despite any kind of apparent difference. I can say that I think locally and act globally, as far as music is concerned.

So you’re into music and language? That’s very interesting… It’s amazing how the language of a lyric, but also of a vocal sample, can bring very powerful meanings at different levels. It’s also funny as I have the same ‘issue’ with my own music, that is 90% of the times instrumental only, so I try to work on the artwork and the titles to bring up the concepts, even political ones…

Well, while writing here, I’m listening to your Sparkle in Grey album “Brahim Izdag” and I can see your point, since the first thing I did when I first discovered the album, was to Google the name and find out his super-brief biography, and then you have an image stuck in your head that helps you find your way through the tracks. There, you use Arabian and I really appreciate what you’ve done with a language so rich in the rhythm that basically gives patterns, but also opens up the whole imagery related to Arabian speaking world. It is interesting that when you use your native language (or, actually a language you can speak), it stays in the background and that is very evocative because again, you use prosody to carry the political concepts you are talking about. For “Le grand électrificateur des ames” I had initially thought about putting some vocal samples as I had done for “Merde, il pleut”, but then I decided to avoid any kind of electric device. Regarding my artworks, I wanted a more professional result in this album and so I asked Tiziana Salvini to think about an artwork trying to use some “primitivism cliché” with some references to the plot of the book that she read while listening some demos, and she managed to put a lot of the themes of the album and of the book (I could literally talk hours about it).

Luciano Berio’s DVD “C’è musica e musica”: I’m not that familiar with his oeuvre. Is he somehow important to you? I suppose you watched that movie… so what’s the meaning of the title?

“C’è musica e musica” is a documentary series broadcast by Italian national television in the early ‘70s in which Luciano Berio introduces some of the most influential composers who worked during those years. The title is a “re-used” Italian idiomatic expression that basically means something like “there is good music, and bad music” but in this context I think is more “there is music that you know AND music that you don’t know, YET”. Luciano Berio is one of the musicians that made me discover this “new world” when I was 17 or 18. I didn’t understand his music back then, but I was very interested in the idea of making music in different ways. Later on, I realized that along with Berio there were Cage, Maderna, Scelsi and also Britten, Bryars and many others. Those guys had followed a rigid academic path before starting the projects for which they’re now well known and that taught me that sometimes it is worthy to dig and study, rather than just try (which is great, but sometimes the efforts isn’t worth the outcomes!). I hate a certain attitude in classical music today, and seeing one of the most prominent figures of all time talking about contemporary music on tv, trying to stimulate the listeners to consider it as something alive and real, so distant from the elitarian world that too many people think it belongs to, is a very powerful image, I think.

So you’re also deeply linked with Italian musical culture. The new album looks more ‘local’ in that sense, and you also told me that was recorded in a very special location, right?

Yes, I recorded “Le grand électrificateur des ames” in a beautiful former church in my hometown. I was thinking about investigating the possible links between music and the space in which it is recorded, and I decided to go in this wonderful place and put only two microphones, one in front of me and one on the other side of the altar. The result has exceeded my expectations since what was happening around the building deeply influenced the music in the album. Take the first piece, it had been written to be something cosy and dreamy, but a huge thunderstorm was hitting and when listening to the piece you would surely use other adjectives. The second, and last day of the sessions, there was a clarinet student that was playing in the rehearsal room behind the Church and changing the position of the microphones would have been completely useless, so I started to listen to him/her and as soon as I understood the harmony (s)he was using, I simply followed it making up a sort of jazzy piece that is my first duet with an unknown musician.

Plus, the sound of my guitar is brilliant! Huge and massive, without touching it in the studio except for cuts and a quick mix between the levels of the tracks of the two microphones. This aspect led to a new project I’m working on with a sound designer and a luthier that I can’t wait to begin!

Wow. That’s extremely interesting. I have to confess that I had a shallow listening to this album so far, on Bandcamp, and I didn’t get into it very much. This is probably ‘my fault’, or at least it’s due to the wrong medium I’ve used to approach that album. This reminds me something I’ve read in the CD notes of Dub Mentor feat. Yan Jun – “Guns of Brixton (l’été chinois)” published by the Israeli label En-T (huge piece, by the way, if you’re interested in language and politics). It said more or less “We don’t take part in the compression war.” Alternative recording techniques are, in my opinion, a way to some sort of innovation in music, but they are pretty hard to be sold now because, if listened online, they actually suck (or they don’t sound as people is expecting).

I remember you liked some features in “Merde, il pleut” which are very far from what I did for this album and well, I can understand that there could be something perceive as “missing”. I can just say that probably one should be prepared while approaching my album since it has been created to be a 40-minutes long trip, that should not be listened to as a studio album, so you need time and proper space-condition, something very difficult to find these days! In fact, I’m thinking about organizing some performances in total darkness, to try to reproduce the ideal condition for my music to be express, but first I need to learn how to play without seeing a thing! Anyway thanks for your advice, I don’t know the CD you are referring to, but I will check it out as soon as possible.

Matteo Fiorini a 27 years old guitar player who, after a couple of years playing around as “McGuffin Electric” on his own or with other musicians, decided to go back to his real name and to release “Le grand électrificateur des âmes” a solo acoustic album recorded in a former church.