Well, Virgin Prunes were one of my obsessions back in the days; I own 3 copies of that fantastic record, 3 different editions, a strange format as it’s a double 10” vinyl record with booklets. Weird is also the story behind those tracks because all of the songs were written during the day and recorded at night, a process that saw the band go without sleep for 3 days.

As often happens, my curiosity is aroused by the weirdos around, like the “Cliente successivo” (“Next Client”) sign! Did you steal it in a supermarket? And what’s the clock? Is it really working?

Let’s say that after a visit to a supermarket I found that item in my bag; me and my wife we have a common attraction to weird vintage “non-sense” items!
The clock is from the famous Solari company based in Udine (just a few blocks from my home) that invented the flap clock models and marketed flap display all over the world, I have a couple of them (Cifra3) that still working but that one has too many pieces missing 😉

Yes, me too I had a passion for Virgin Prunes, but maybe more for the ‘goth’ phase, “…If I Die, I Die” is one of my favourite records ever. But I love to play some of their craziest songs to my ‘mainstream-music-listening’ friends them telling them that is the band of U2 The Edge’s bro. Talking about easy music, I see the Broken Flag box and other nice ones… but what’s the Charles Manson one? Speeches? I didn’t know it. I also see Motorpsicho boxes if I guess well. Another band I like (especially the masterpieces “Demon Box” and “Timoty’s Monster”).

Of course “If I die, I die” is a milestone.
I really like box set editions as objects and because sometimes you can find hidden treasures as b-sides, unreleased tracks, live versions, remixes, graphic artworks, etc… a good way to explore a band, a record!
That Charles Manson box set is a collection of 2 CDs, a combination of “LIE” and “The Manson Family Sings”, packaged to look like The Beatles‘ “White Album” on one CD plus “Live at San Quentin” with a cover art similar to the Beach Boys’ “Pet Sounds”; I’m not a big fan of Manson but I found it at a very cheap price in L.A., a good souvenir.
Speaking of uneasy listening, “A Retrospective 1982 – 1985” is a box set (5 CD) from Broken Flag that my friend Giancarlo Toniutti gave me years back and features some of his tracks plus tons of other noisy acts from that period.
Those Motorpsycho boxes are deluxe editions with 4/5 CDs for each release with the original albums, B-sides, rarities, live versions and huge booklets. Besides experimental electronic stuff I really enjoy to listen to some heavy rock and those Motorpsycho albums are a good example of originality and attitude, they are a band completely out of any rock fashion trend really focused only on music. 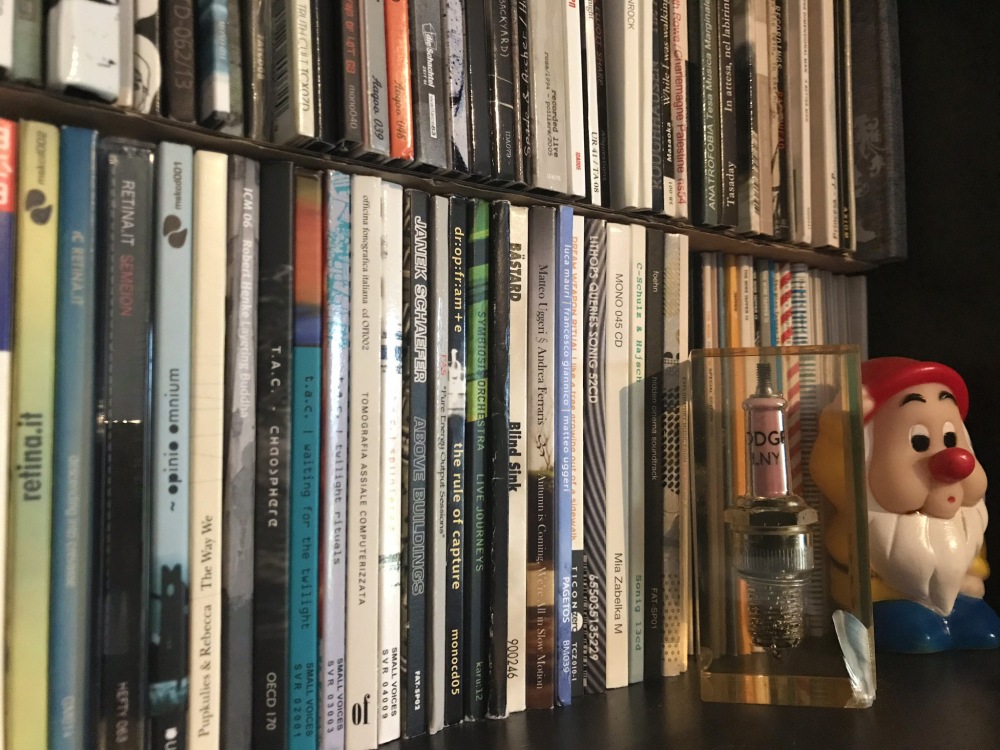 Yes, I fully agree with you about Motorpsycho. Talking about motors and engines, what’s that engine spark among your records? Why is it there?

Often I’m visiting and discovering abandoned places like old factories, derelict buildings, abandoned places, all about going into places you are “not supposed” to go, a kind of exploration and sometimes I pick things up, that object is an engine spark plug inside a block of plexiglass, quite strange and I found it in an abandoned office full of things where time seems to have stopped and “frozen” in 1976 as all the stuff inside was referring to that year. Now I can recall that I used that text written inside as a title for a track featured on one of my CD album released 18 years ago. Due to its heaviness is useful to divide and support my cd collection.

So, you seem to be a collector of weird and uncommon things, and then you put them in the ‘right place’. I see a sort of connection with the way you play music now. Do you agree?

Well, I’m always collecting sounds too from instruments, weird devices, found objects and everyday’s life. The main idea is to create from them an atmosphere I have in mind, to give them a new shape and put it in another world!

Deison is involved in the experimental electronic area since more than 20 years (he played in Meathead during the ’90s) and he approached the world of sounds doing his own tape collages with tape recorders, turntables and objects mainly in the field of experimental noise; he runs a small label (Loud!).