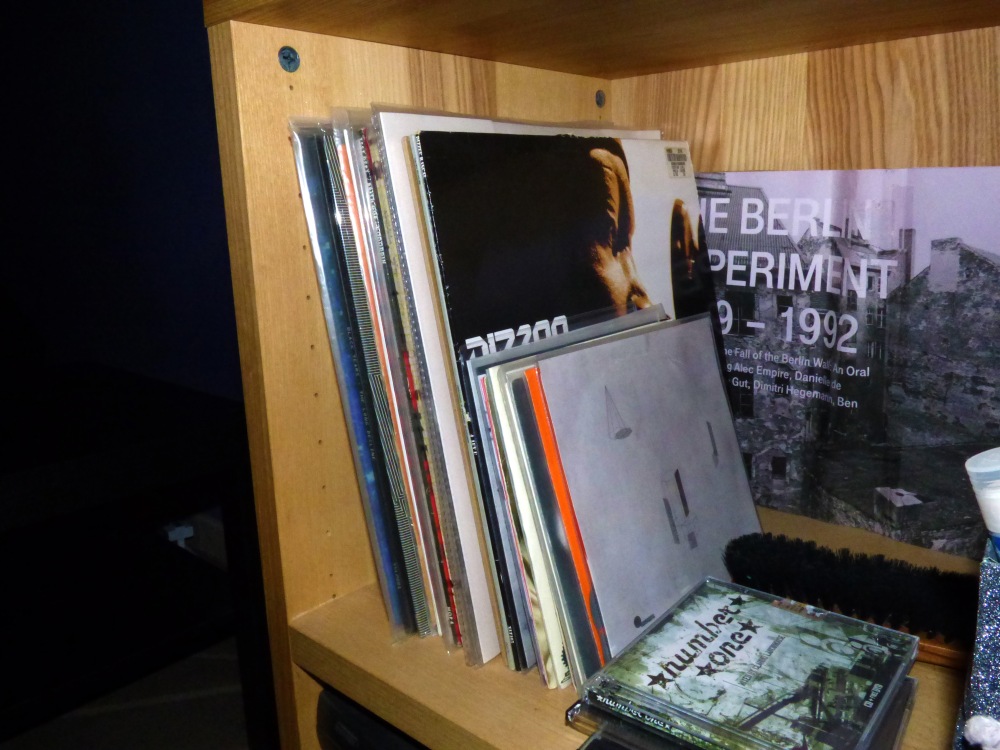 I love your corner of records. It looks like a tiny messy temple of precious things. In the very centre, there is that Godflesh box that I’m finding on many shelves here (also because it’s heavily visible, as much as Godflesh music is heavily strong). You’re a couple of very young organizers of experimental music gigs, maybe you were very young when their eponymous album was issued. What’s your relationship with the music of that age and musicians like Justin Broadrick who is still out and playing at (in my opinion) very hi level and quality stuff?

Hi Matteo, thank you so much for reaching out to us. You’re quite right about our Shelf, mainly because our entire house’s a messy temple of stuff. We basically don’t have any money to spend on records, so almost like 75% of what you see has been left at our place by friends we had over at the headquarter during PAYNOMINDTOUS 2017 event season or delivered us as free press copies. We tried asking to stop sending us free stuff, a digital DL link is enough you know, but it’s been worthless. For example, we just couldn’t prevent Simon Balestrazzi to send us every Azoth release since #1… so we stopped arguing and settle down to be grateful (and humbled).

We were born in 1989 (Andrea) and 1993 (Cristina) respectively: Godflesh self-titled CD was out in 1988 on Swordfish so we don’t have any first-hand experience with Godflesh and Justin. Well, we hadn’t until last August when we actually met him, saw him perform as JK Flesh (amazing live show) and spent several hours talking about anything from drugs, to politics, and pets (he has many)! Justin’s just an amazing piece of human being responsible for the dopest (and, we must say, criminally underrated) music in the 90s together with guys like Mick Harris and Kevin Martin, that we came to love thanks to the immediate possibilities Internet (Discogs, Soulseek) has offered us. Any music timeline has been levelled to the ground, anyone can be influenced by anything as long as he/she can have access to a digital copy (YouTube, mp3) of it. So, we feel it’s now quite meaningless to separate and group music by its release date, as well as its genre or attitude, it’s just not relevant anymore. This is something quite complicated to be 100% understood and embraced by people older than us, but it’s something you have to deal with if you are to produce music nowadays and not sound like a total conservative ass. 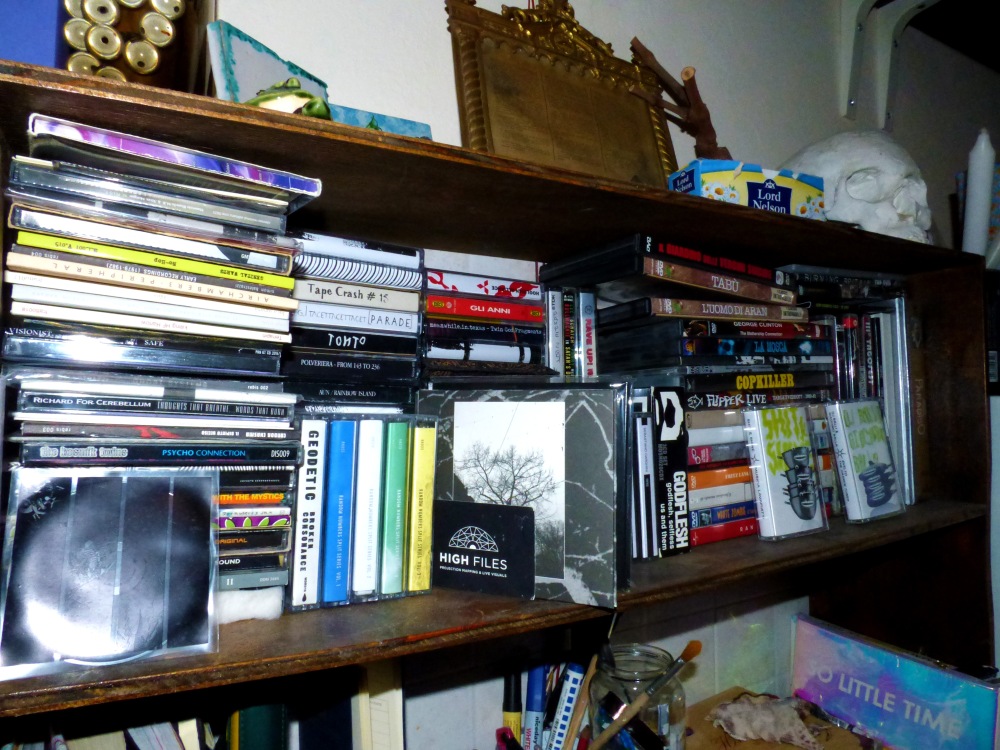 I also see special DVD films such as “Tabù”, “L’uomo di Aran”… are you fans of that too?

We love watching nondubbed movies (dubbing is a crime!) we download via uTtorrent (again, thank you the Internet), but if you consider the time spent listening to music, working, eating, managing the webzine, djing practicing (we’re very bad, yet) and, occasionally, sleeping, we have very little time left for reaching the status of cinema nerds, after the music nerds one we feel we already have. So, let’s just say we like buying forgotten 3€ DVDs we’re never gonna watch. We’d like to recommend something tough: “Cop Killer” by Roberto Faenza (aka Corrupt, 1983, with Harvey Keitel and Johnny Lydon, Abel Ferrara basically copied it with “Bad Lieutenant”), which is a fucking masterpiece. Not only because of the title. 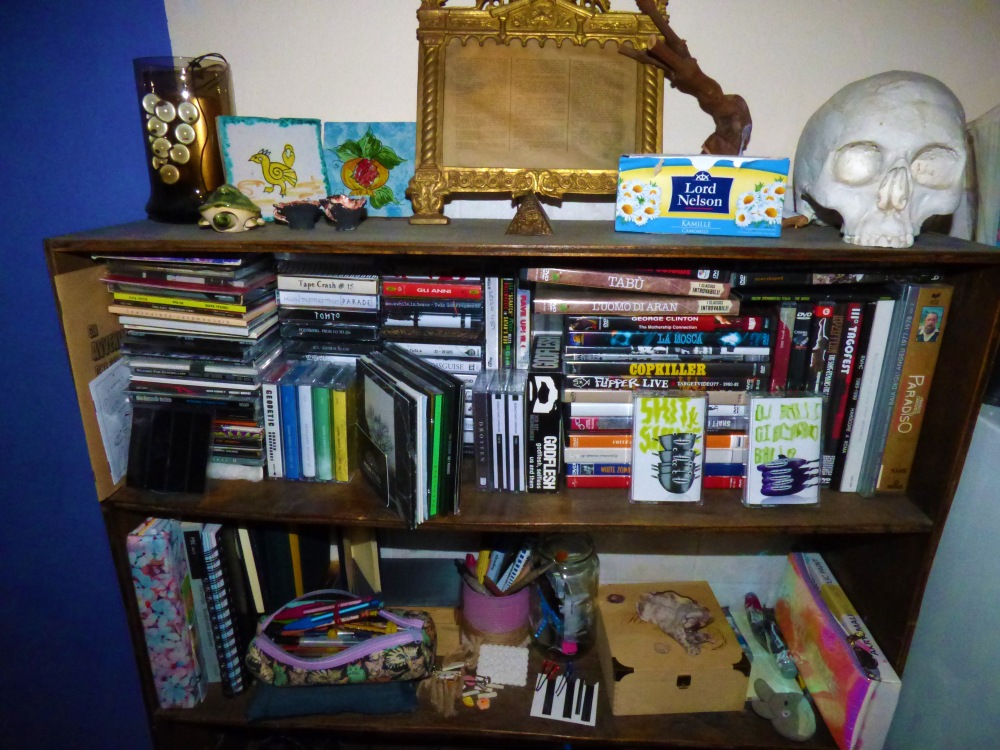 A baroque frame with some mysterious yellow paper in it (the Bible? the Koran? George Bataille?), a branch, a skull and Kamille box. Is it an installation? As I asked Vittore Baroni (https://concreteshelves.blog/2017/12/04/vittore-baroni/), can you tell me to who belong that skull?

Yeah, it is! Cristina is responsible for the installation, for the branch she carved and painted, and for the chalk skull she did, we have many more of them around the house! About the baroque frame, well, we’d love to say it’s an ancient magick anathema delivered by Austin Osman Spare, but we’re afraid it’s nothing but an old Latin prayer in a fake gold frame. We found it in Cimitero Staglieno, Genoa, inside a family mausoleum so old the roof fell down (take a look at the picture, you can see it in the middle). We felt it’d fit our shelf, we don’t know whether some undead entity is ever gonna claim it back tough. For now, it just fits. Thank you very much for having us over, long live Concrete Shelves! 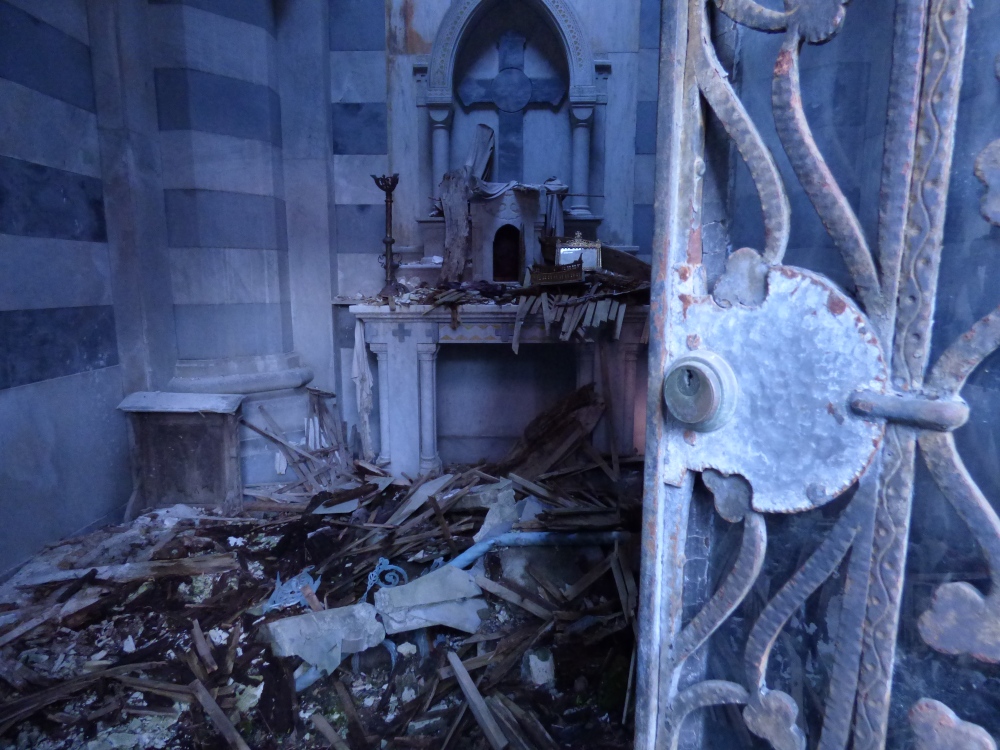 Andrea Migliorati and Cristina Ruggieri are founders, owner and promoters of the webzine and Turin based organization PAYNOMINDTOUS. 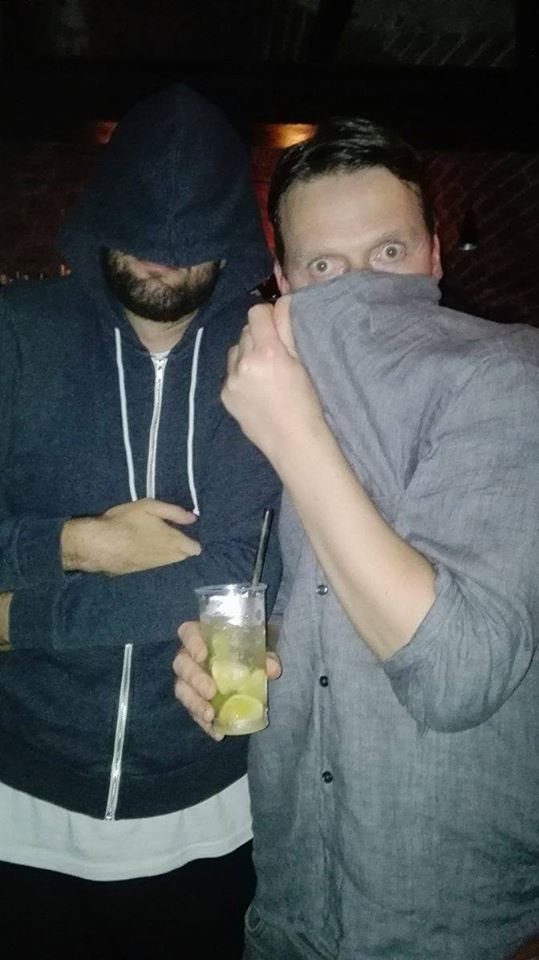