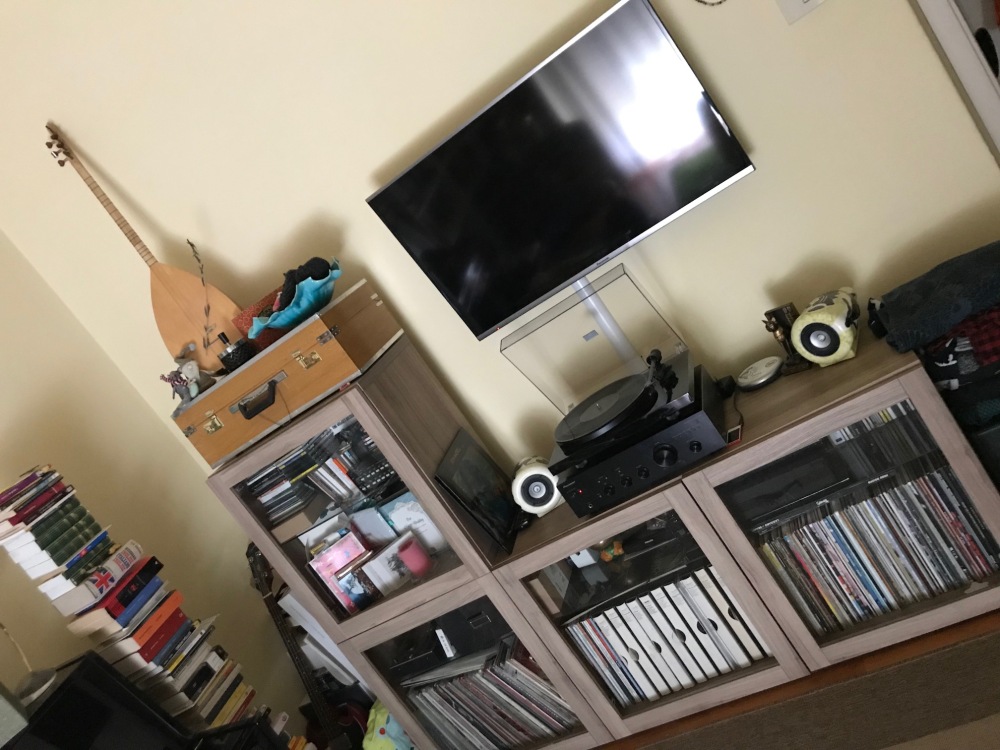 I see interesting gear around, like the two amps beside the turntable. What are they?

They are a sort of work of art. The little speakers are made of ceramic. They generally born in one colorway, but with the customization of a local artist, these became unique pieces. I have to pairs: one in yellow (the ones I am using) and in grey (they are hidden somewhere. They fit perfectly for jazz and classical music. 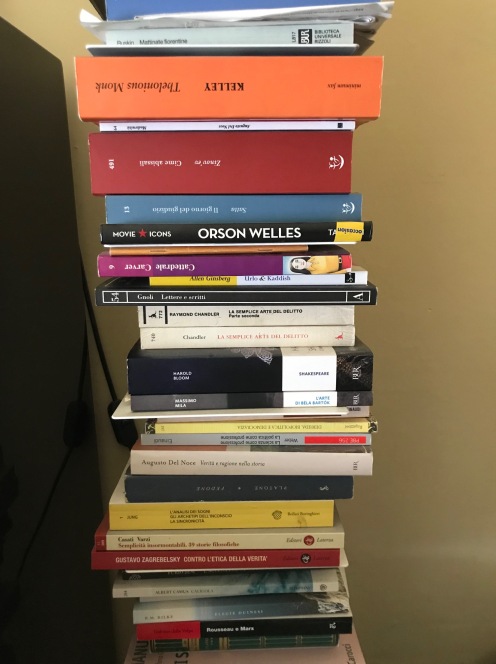 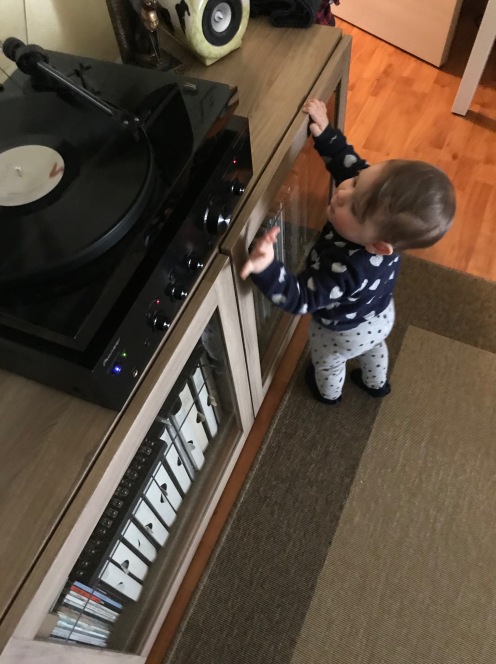 That’s so funny: I first noticed the pile of instable books, so I though “well, for sure Riccardo doesn’t has kids around”. Then I saw the one with the little baby attempting to the safety of your turntable. This is a topic often covered by Concrete Shelves, for instance Mark Nelson of Labradford/Pan American sent me pictures of his dog climbing over his beloved and precious amps. He said this helps him to keep his ‘audiophile side’ under control. So I suppose you’re not too much attached to your stuff, right?

Actually Elsa is really fond of lights, shiny, sparkling and bling-bling stuff. So, when she turns on the amplifier, it’s like to have a party with all those lights (green, red, and blue buttons).

Yeah, I can understand Elsa’s behavior. How old is she? Has she developed any taste already? Mine older one (5 years old) at the beginning was really into very ‘straight’ music, 4/4 German stuff for instance (or Killing Joke, any sort of ‘clear and repetitive music’). My second one (now 2) looks more ‘wide’, she seems to enjoy also more melodic music (folk for instance).

She is one year old and almost a month. As far as I can understand, she really loves, or at least, it seems she loves – Jim O’Rourke – few days ago, I have also played “Vulvaland” by Mouse On Mars, and it seems she liked it. Or The Upsetters, Sam Prekop, ecc. But we are quite far from talking about “musical taste”. For example, me and my wife bought a Raymond Scott album (“Soothing Sounds For Babies”) that we thought could fit for Elsa, but she has never been so engaged in that music, despite the target of those releases (a sort of cognitive apprenticeship for babies and children).

I had the same experience with Olivia: the famous Raymond Scott album just didn’t work for her, it distrubs even me. But not as much as “Mouth of Babies” of Nocturnal Emissions, that a journalist mentioned like a record that “scares the hell out of you”. Do you know it? In the first edition it came into a diper… I don’t have it, but a friend of mine had it. He never had any children, actually.

Well, actually, for me, it’s very difficult to find something scary. I would say that it’s more disturbing, than frightening. I simply like Nocturnal Emission, or at least, I have found “Spiritflesh” very profound, a deep descent in the world of drones, similar to caresses for me. Unfortunately I don’t know if is that album. If you search for disturbing stuff, I would suggest the latest Black to Comm release. That is something.

Nice to see the Velvet’s boxset, I just found the same among Chris Forsyth shelves. He said “There’s really no one who’s not influenced by the VU, whether they know it or not.” Do you agree?

The Velvet Underground box set is a sort of anachronistic piece: it’s a CD boxset with also unreleased tracks and with the recording sessions as front covers per album. Well, I would say that Lou Reed changed the “rock scenario”, a sort of dadaistic attitude, much more cryptic, a more intimate thought, despite the apparently non-sense metaphors in his thoughts. But I don’t feel so much influenced by them (and I am not such an expert of VU). They had genius peaks in their life, but I cannot say that I got inspired from them. Actually, this summer, I had the chance to see John Cale with a live band in Pistoia, and it was a great surprise, with an awesome band and splendid reworks of his past hits, with a really fresh touch.
When I saw the “Berlin live” by Lou Reed, it was great, but it didn’t give me the feeling Cale did this summer. 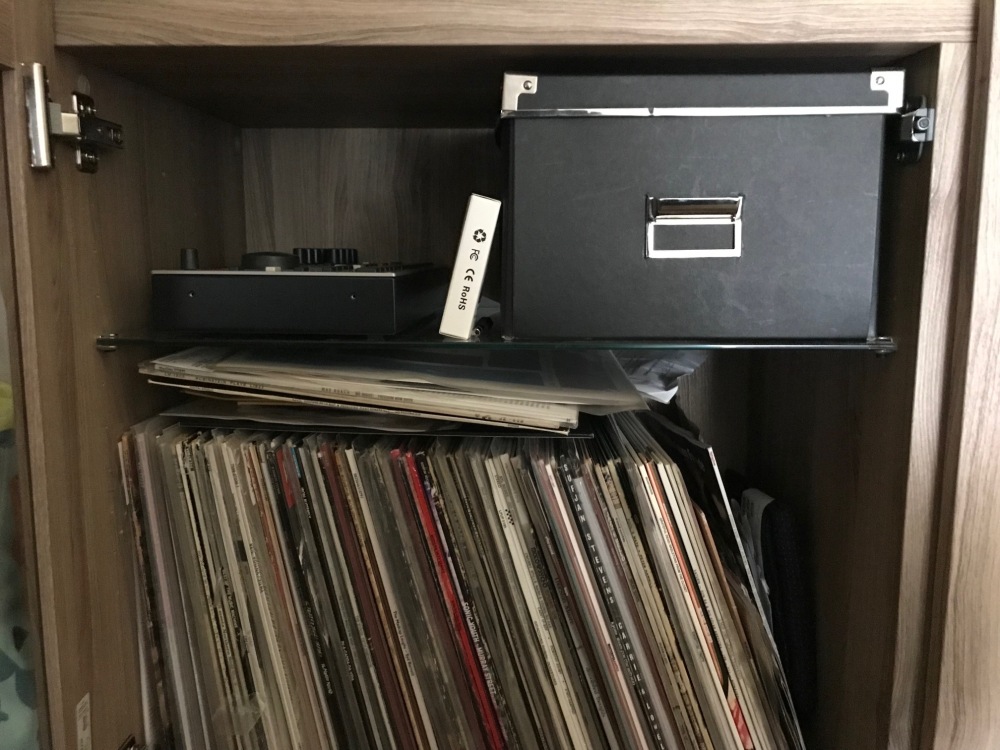 Ok, so which are your main influences? I see a lot of different stuff among your records, such as Boards of Canada, Sufjan Stevens (whose “Carrie and Lowell” is for me an absolute masterpiece), Wladimir Horovitz (that is totally unknown to me, sorry), Tom Waits, Rita Marcotulli (also unknown…)?

Wladimir Horowitz is a pianist. I bought that box set in particular for the execution of “Funérailles” by Franz Liszt.

I have many influences: from electronic music to jazz. I could enlist a neverending list of musician, but I don’t have a specific genre. For example, in the same day I can listen to Nate Wooley and Autechre, or Steve Reid and Black Merlin. In this year I had the chance to listen (hence to buy) the latest Jon Hassell release. I like Vladislav Delay very much, Dub in general (Babe Roots, Deadbeat, the young Plastikman, Maxim Wolzyn, Rod Modell, Topdown Dialectic), modern jazz like Rob Mazurek, Peter Evans. Really, I have no restrictions in what I listen to. The taste often doesn’t reflect the beauty and the width of music, so, in my opinion, is not the right criteria to listen to music.

“I grandi del jazz” [“The Greatest of the Jazz”] set of publications is interesting: is that something that has been useful to you, that you sort of studied? Tell me about these folders…

That jazz collection is something incredible and for more than one reason:
a) you can have a sort of panoramic view of what these great artists have been in their historical contexts and in developing their techniques;
b) those volumes are written by experts that know about music and that have a musicological approach (in every volume – they have been issued weekly in the past – there is a part dedicated to their solos, so you can listen to the vinyl and follow the staff in the same time to get the idea);
c) if you love jazz, you can still find some rarities (Toots Thielemans live, or Grappelli‘s performances, ecc.) and anecdotes of great and unkown protagonists of jazz.
Yes, it can be useful to study, and in these days I consider those folders as a sort of heritage to be jealous of.

So jazz is important for you, right? But it seems that you also love what can be sort of being considered ‘the opposite’, techno, as your last album as Munchies of Flowers is out on Switch Music Recording and is quite beat oriented (even if not straight actually, but very articulated). And its cover art reminds me the picture in the frame you have in the living room. Is from the same artist?

You have a great sight. Congrats! Actually, I have submitted the front cover of my album to the same artist who did the painting on the piano. She is Cecilia Divizia and I simply love her style of drawing and I also like to put together the handmade art and the electronic music, two worlds that in my opinion needs to stay together. Following this topic, I also believe that there is no difference between some sort of electronic music and jazz music. I believe that it’s just a matter of sound, but music is always played by human beings (even if you invent an electronic system of algorythms that makes music). You can improvise with modulars or with a trumpet (we have to think that artists like Rob Mazurek, Nate Wooley or, for example, The Comet Is Coming are blending these two – more than two actually – genres of music together because if you want to live the music, you have to cross boundaries, unify the differences). If we also think to the word “techno” it doesn’t mean anything: it means that the sound is taken from a “technical” source, a synthetical source, but it tells nothing about the music of about a certain type of style. The world of techno is a wide world and we can find people like Jeff Mills and people like Samuel Kerridge or, Alva Noto, or Porter Ricks, etc…

He has curated the mixing for the tracks In the Supreme Hashish of Our Dream (pt. 1), with Jimmy Hastings (Caravan), Xabier Iriondo (Afterhours) and Steve Schroyder (Tangerine Dream); The Rumble, with John Greaves (Henry Cow, National Health), Ivan Georgiev (Tuxedomoon), Chris Gibson (King Crimson), taken from the latest release by Paolo Tarsi A Perfect Cut in the Vacuum.
He is very fond of music and now he also writes as music journalist for Impatto Sonoro. He lives in Florence, precisely in Rifredi. 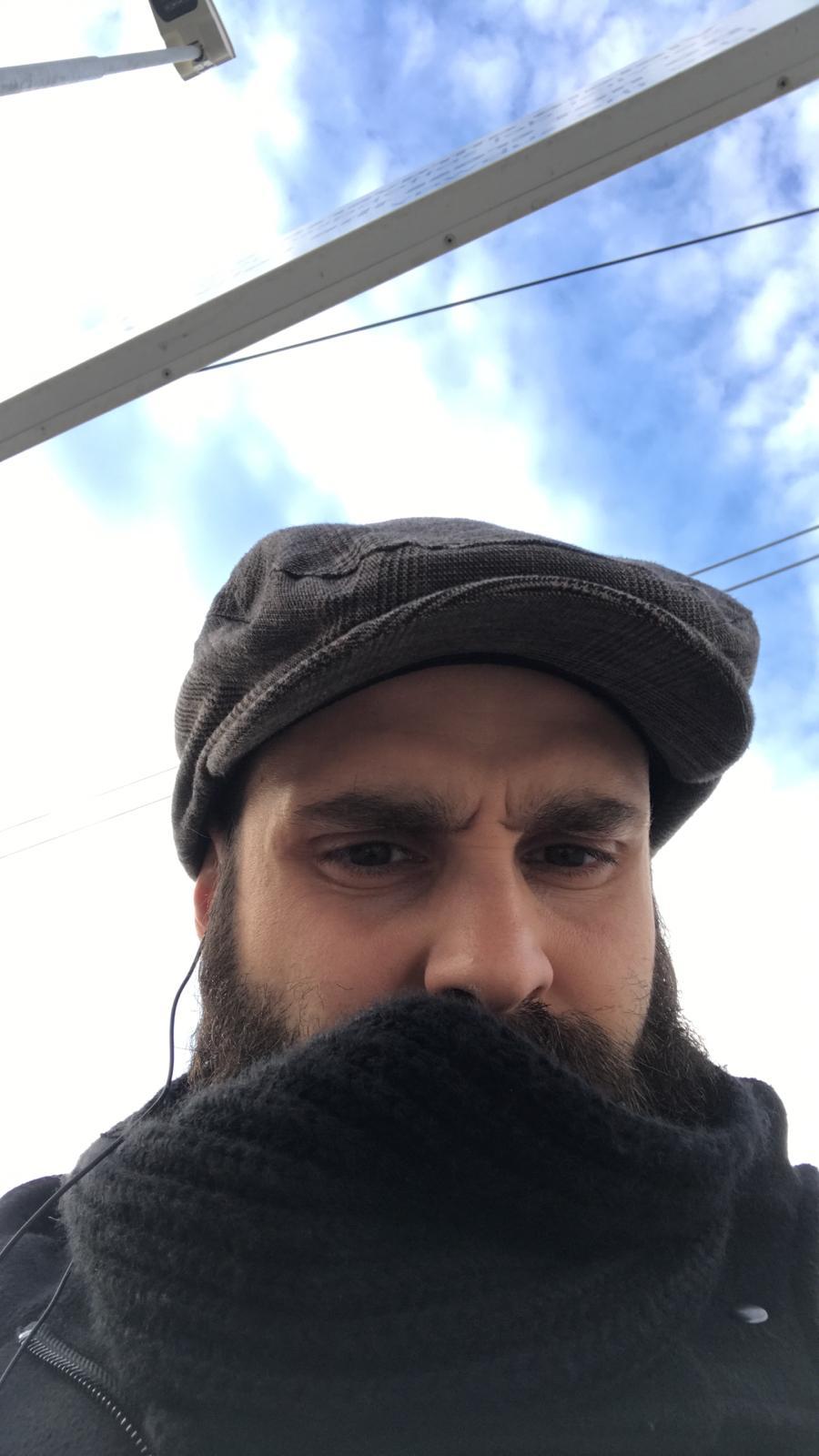