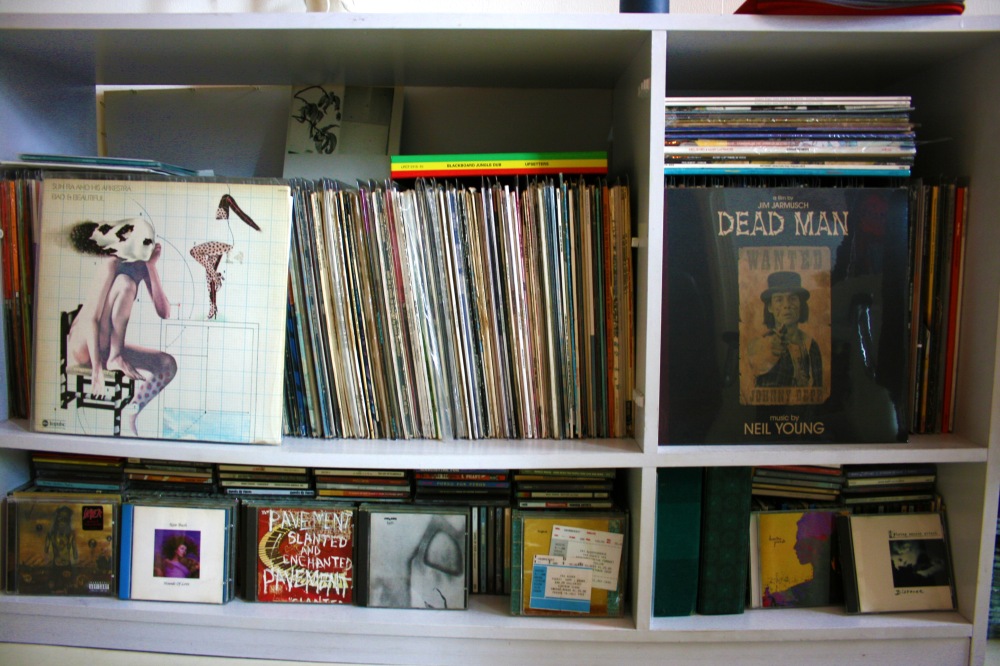 I see quite a lot of albums I like, including the soundtrack of Jim Jarmusch “Dead Man”, for me one of the best album of Neil Young. I’ve listened to your collaboration with Mia Zabelka and James Plotkin, with great dark reverberating atmospheres, slow guitar tunes on the first side… I see a sort of connection, even thou the weirdness of some passage reminds me the Residents or even some of O.L.D. albums with Plotkin himself…!

Psyched to hear that you can recognise some albums you like. Of course, they had to be a bit organised for the photo shoot or else it would be impossible to see what was in those shelves. But I didn’t overdo it much. I put most of the albums that I had been listening to recently or bought in the last months upfront. Regarding the soundtrack of “Dead Man”; that albums certainly holds a special place in my head. I was lucky to see the film when it came out in the theatre and I can still remember what a huge impression the soundtrack had on me (I have two vinyl copies of the album). I remember walking out of the cinema asking myself what I had just seen, like I was in the midst of some heavy fog or something. There’s something about the guitar playing that made a huge emotional impact on me. It’s so raw and primitive but at the same time very moving.

Regarding the collaboration with James and Mia; it certainly has some connection to the soundtrack when I start to think about it now. Hm? That’s an interesting observation, but I don’t think it was intentional. But for sure, The Residents and O.L.D. albums will always continue to have a big influence on me. And of course working with both of them broadened up the palette, they delivered some great layers with their instruments that certainly shaped the whole album after I had delivered them the first drafts. 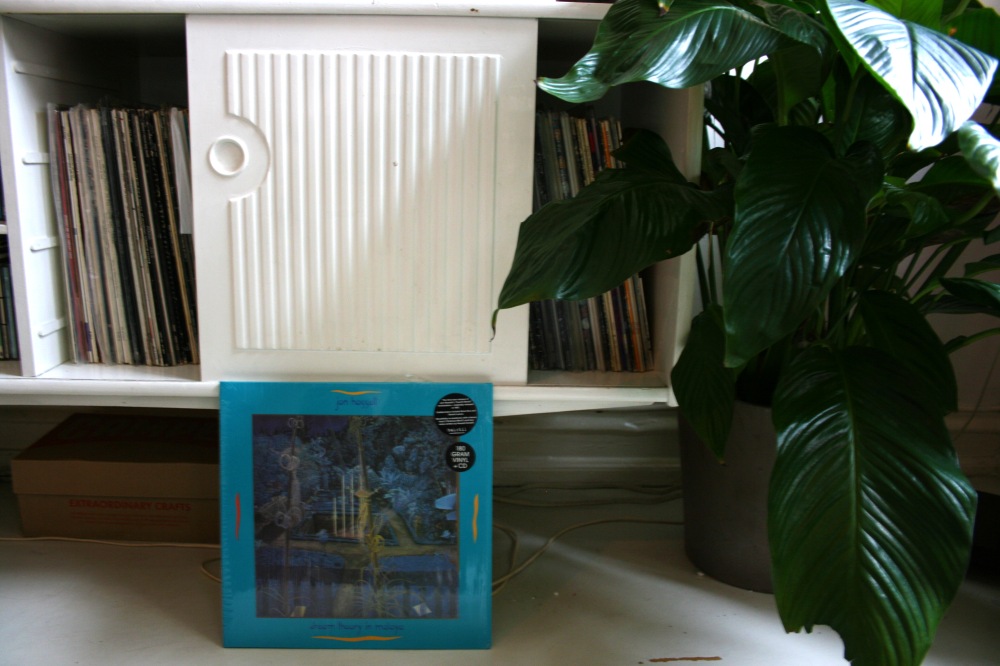 Funny to see that you say “that albums certainly holds a special place in my head”- not in your heart – for a music that had “a huge emotional impact” on you… Jon Hassel impacts your heart or head?

Yeah, I was trying to change the usual way of saying it. But it many cases it´s true, some albums stay in your head, don’t they? I guess Jon Hassel has had an impact on both my head and heart. He’s one of those great artists that manages to do both. A while back James Plotkin sent me some old live recording he had of Hassel and I have been listening to them over and over. Those recordings really puts me in a special state of mind. I seem to be travelling many while listening to him. Hm, difficult to explain really. Maybe I’m just a simple headphone mind?

Ah! That album from NWW and Stereolab is cool! Talking about weird stuff… I suppose you intentionally kept the “Smurfeland” LP out! Funny… I’m just discussing about children books and cartoons with Isobel Blank, an Italian artist and performer who’s fond of Barbapapa. Is it something you loved in youth? In Italy the “Puffi” song was sung by Cristina D’Avena, now a sort of sexy-star. Who’s the guy beside the little blue dwarfs?

Haha, yeah that´s really gives me childhood memories. I kept the “Smurfeland” LP out because that must be one of the first records my parents ever bought me. Man, I always thought they were a Norwegian invention until I later learned that they (conceptually) originated from Belgium. I stocked it in the basement because I wore it out a long time ago. I also used the record at some of my DJ-sets for scratching, so the vinyl is completely wrecked now. Most of the albums you see in the basement are defect, they’ve had a rough life, some of them have even lost their normal shape. But I have bought new copies of most of them, those that I could still find. I wouldn´t normally keep records in the basement, at least not without any proper protection.

The guy/record besides the blue dwarfs is a vinyl of the Disco Mix Club (DMC) series. Its a label from the UK that used to be very popular in the 80´s, at least within the DJ communities. They would be doing mixes and remixes of different artists and put these out every month. I used to be so thrilled when I managed to get a hold on some of them. And I used to play the records in my fathers nightclub at the age of 15. The mixes sounded so cool when I was younger even though many of them sound rubbish when I’m listening to them today. Nevertheless, they were hugely influential for shaping me musically.

Wow! So your father had a nightclub?

My father (and mother) used to run a restaurant and a nightclub in Hamar back in the 80´s. By the way, my dad was a also a musician and played most instruments but preferred the bass. Anyway, that’s why I got into vinyl and mixing records very early. You could say that being a DJ in that nightclub was part of my musical education. But I was horrified in the beginning, nervous of how the mixes would sound when there were lots of people on the dance floor, learning the pitch thing, finding the BPM’s, handling the equipment by myself etc… But somehow I slowly ended up handling these situations pretty good. 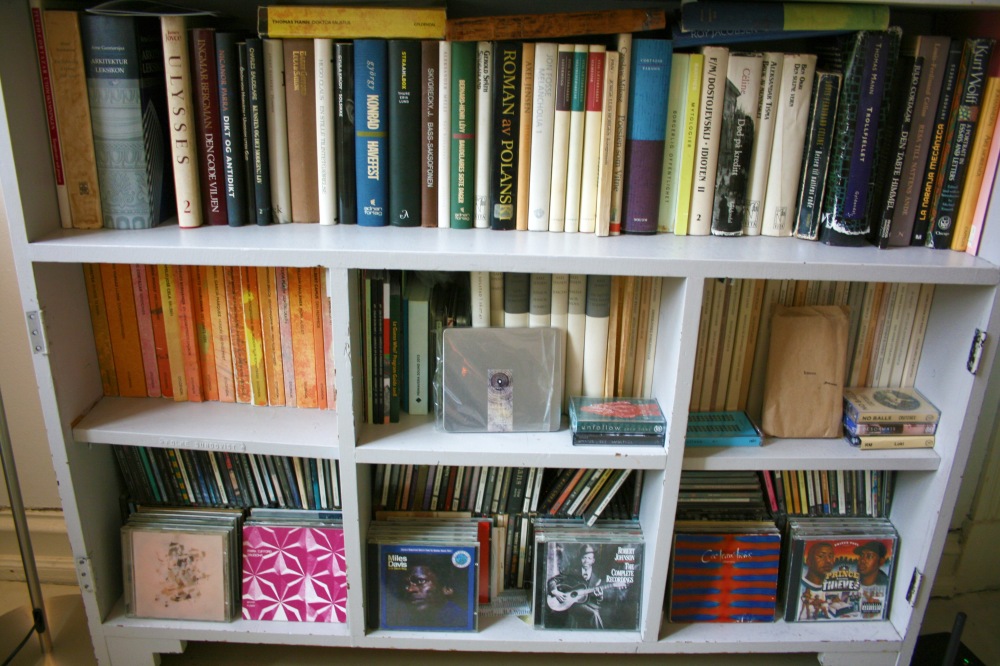 Also Charlie Mingus and Kraftwerk seem to be in danger, just beside your bike! I like to see someone treating vinyls not as fetish precious shrines but as ‘stuff’ in the house… But why are they in the same place of the bike?

So as I mentioned earlier, I have new copies of both the Kraftwerk and Charles Mingus album. But thanks for your concern, I would be worried myself if someone showed me those pictures, haha… I would never leave those “babies” in the basement unless they were defect. But maybe the bike is listening to them during night time, who knows? 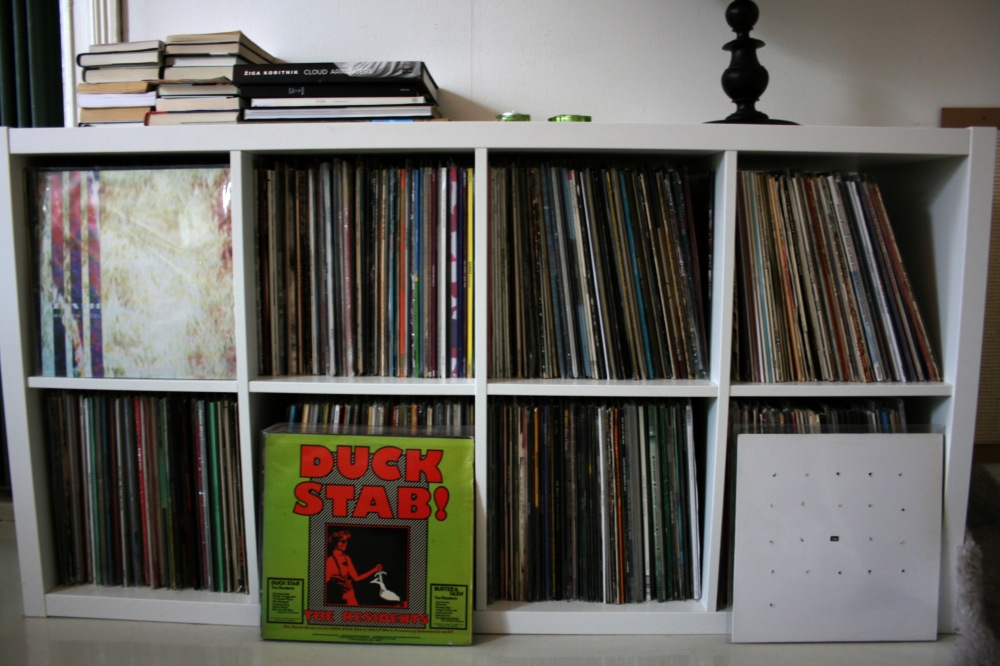 “Motion Pool” by Main: one masterpiece for me. I just found it also in Aidan Baker’s shelves. Residents (they need no introduction) and an LP I can’t recognize, nealy all white with small dark dots. What’s that?

I totally agree, “Motion Pool” which is truly a great record. Remember having to pay quite a lot to get it on vinyl (I had the CD for many years). But it was worth every penny. I love all of Main’s albums. Never got to see them live though, only Loop and they were fantastic. Robert Hampson is someone I have adored for a long time. Cool that you also spotted “Motion Pool” in Aidan Baker’s shelves, please say hi to him from me! The white vinyl with the small dark spots is Alog’s “Every Word Was Once An Animal”. Side B is Astral Social Club. This is record nr 20 in the Fat Cat Split Series.

I don’t know Dexter Gordon, but I very well know Melvins, and it seems you like bot a lot, right? Anyway, why there are those curtains beside those LPs? You open and close the curtains in order to protect the records?

The Dexter Gordon box was given to me as a present. I haven’t really listened to it much but I can remember it came with a t-shirt. I tend to listen to more of Alice Coltrane, Sun Ra, Charles Mingus, Pharaoh Sanders, Ornette Coleman, certain periods of Miles Davis, etc… when it comes to jazz. I really like at lot of those Impulse releases. I bought the limited Melvins box in Oslo when they played here. And I got all of the records inside signed by King Buzzo. That was a fun night. One can never get enough of Melvins. I love the fact that they have been around for so long but have managed to keep their integrity. It’s not curtains by the way, on the right side is a towel that I hung up dry (the appartement is not that big so I hang things up to dry around in the living room). And on the left is a wooden blanket from my reading chair, the cat likes to have a nap there so it keeps her warm. But that was actually a good idea, maybe I should invest in curtains to protect the records, that would look great, ha? Wonder if anyone does that? 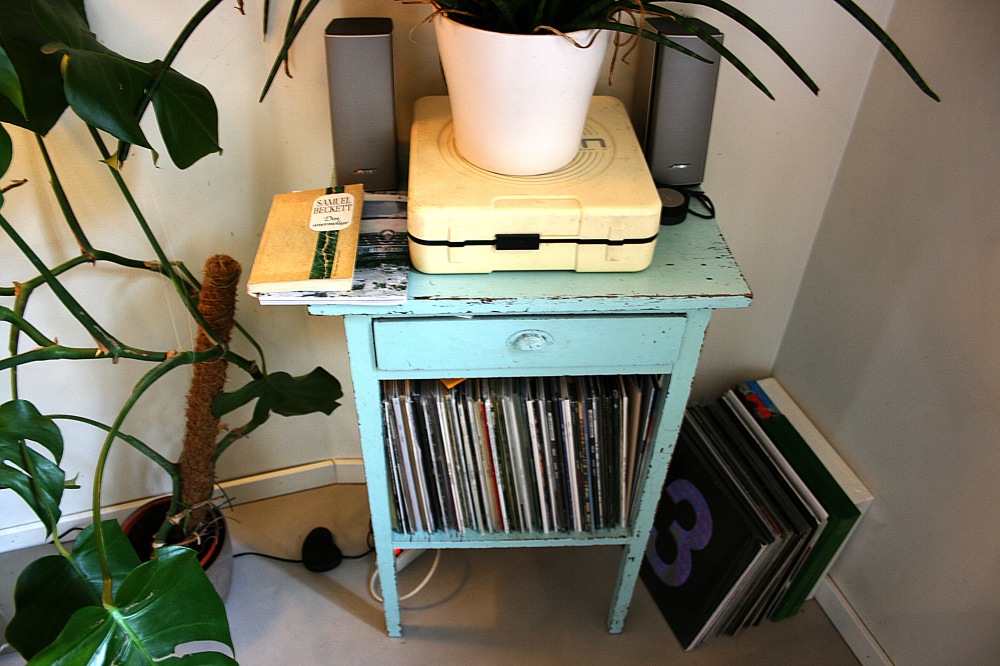 No, I didn’t find records protected by curtains but an Italian guy from the band ODRZ sent me pictures of records hidden into sort of a cupboard, closed in [the post is still unpublished].

My favourite photo is marked by you “kitchen” and I see a sort of old boxed turntable, a book from Samuel Beckett, two amps and plants around (and over the turntable). Ehm…

Yeah, if it was up to me then I would have a turntable in every room and speakers in all of the rooms as well. One day… one day… The Samuell Becket book was lying there because I´m reading his trilogy (“Molloy”, “Malone Dies” and “The Unnamable”) for the third time these days. I really like them all and I find them very inspirational for my own writing projects.

There really are plants all over the whole appartement, in every room. So I can pretend I’m in the jungle and not the city at times. They also keep me healthy and protects the air from pollution. And I do hope they like the music they are served.

Benjamin Finger is a composer, electronic music producer, DJ, photographer and film-maker based in Oslo, Norway. Since his 2009 debut solo album “Woods of Broccoli”, he has produced a prolific output of films and music with a healthy disregard for genres.