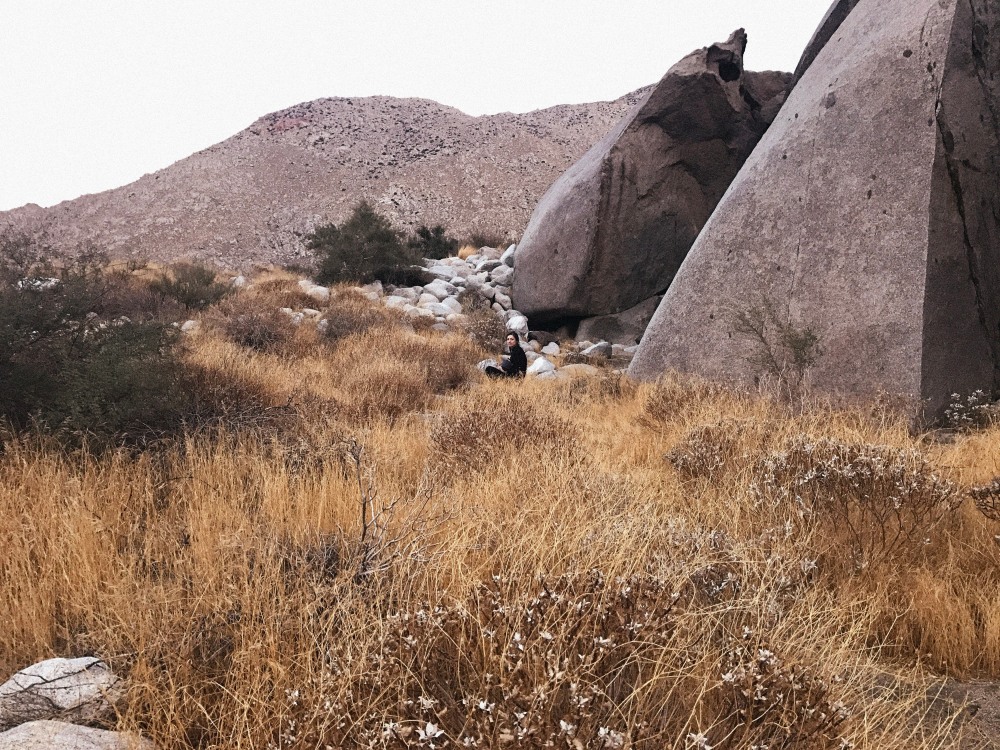 I see in the picture you on a mountain, among boulders and weeds. If I guess, you’re breastfeeding a child. That’s a lovely picture for an artist, in my opinion, and thousands miles away from many aggressive-sexy female press photos, often not so rare even in the experimental music field (not to mention pop and rock, obviously). The record is  inspired by the “New Young Birth” of your child. Can you tell me about this? I have two daughters, and I’m extremely interested into the relationship between being a parent and doing music…

That’s a great guess! In the photo Im in the desert near my parents house. My partner and I go there every year for the holidays. The photo is from the first time we took our son there. I was nursing him at a Cahuilla rock shelter near a creek and an alluvial plain at the foothills of the San Jacinto mountains. Im glad you like the photo!

The photo of me nursing is an honest image of who I was at the time of making the Mára record. I was attached to my son most of the time, and this was the first postpartum music that I made during his nap times. I used cassette material recorded right before and and during my pregnancy to make up the most of the compositions.

After I gave birth I knew what it was to take care of a vulnerable helpless baby, and how real the infants need is to be taken care of and to be loved. I also recognized that this need is still sometimes present in adults. Many initiation and puberty rites are missing from our cultures and societies. I know growing up that I was just sort of thrust cluelessly into mensuration and individuating. Many people, myself included, transferred their love from their parents onto a love of a significant other, or a parental figure such as a musician or artist etc. Which connects to the “aggressive sexy PR photos” that can appear when the transference is needed.

In my hormonal fog of new mother-ness and lactation-singing to my baby – I could see a Mother archetype in the “sexy angel musician lady” – singing to anonymous adults through head phones and videos. The sound of a woman’s voice, complimented by the physical markers of fertility and mothering (big breasts, full lips, blushing skin, hips!) – can create a new kind of temporary partner or parent figure. The safe mother as savior with a masked lullaby for the adult.

The lyrics on the record are about this archetype, and its two faces: one that is a new born mother, and the other that is woman as object. “One with the mother as when you were a boy” reflects the drive to re-create union and total immersion, a drive to seek completeness. Sometimes a life-long drive toward oblivion, constantly repeated in pairings and different partnerships. A lot of my new motherhood psychological experience was about teasing out the archetype apart from its origins, and seeing into an often overlooked or misunderstood subliminal aspect of music making.

Becoming a mother helped me have more focus with making music, and I enjoy the constant challenge of holding on to making art, music and work while also being a present parent. I don’t take my time for granted anymore! And I feel like pregnancy and giving birth empowered me to believe in myself in a way that I didn’t before. With this record I also wanted to honor the “me” that I was before becoming a mother because I will never be the old me again. I had no idea how much it would change my life! It was a new birth for my son, and a new birth for me as well.

I hope that images of women breast feeding and mothers and fathers working while also holding an infant, can be seen as empowered and inspirational-maybe just as powerful as the sexy PR photos. When I see a breast feeding woman’s photo, I feel like she shares power, instead of diminishing it. I feel like I am included in a powerful lineage, and that the image was not constructed by the traditional capitalist male gaze, but by an honest picture of sustaining human life and normalizing a beautiful body part, which to me is super sexy, keeping the erotic beautifully banal!

I see, it all makes a lot of sense. And if I watch at your books, it seems that you’re very interested in the gender topic, with titles like “Sexual Politics” and “For Woman Born”. Also the body seems to be connected to your interest (“Sacred Pleasure”). If I listen to your last album as Màra, I can say that I find it very ‘physical’, in spite of the fact that the music is gentle and ambient oriented.

Yes, I am very interested in “the body”. The human body, or the bodies of plants, lichens, slime molds, how bodies interact. The limits of a body and reproduction, what makes a body? Im also interested in how the human body correlates to a “body of work” as in an artistic practice that spans a lifetime, and how the human body relates to “bodies of water” or the body of the earth.
Up until about 2008, I was very unaware of my body in so many different ways, I was very cerebral and rational, and thought of myself as existing in my mind only. I had a couple of health problems and saw an amazing naturopath doctor who helped me to understand my body and be present in it, and to tune in to and be present with different plants and their medicinal properties. This also happened at the same time that I was introduced to feminism and political ideas about the body and what has been done to bodies throughout history. I started a practice of running every day, and I remember the first time I actually “felt” my feet on the ground, it was such an amazing experience to inhabit my body in a way I hadn’t for a long time. Becoming pregnant and giving birth was the ultimate celebration of me embracing my body and honoring taking up space in the world and being proud of what my body could do.

I see among your records quite a lot of “quiet” music, like Arvo Part for instance… do you also have more ‘rock’ or heavier listenings? Maybe in the past?

Although Arvo Pärt music is quiet, is also physical to me. The way sound occupies space, and how it is performs and interpreted in the performance space is present in his recordings as is a calmness of the body in observation – the vibrations passing through the audiences bodies as it is performed in real time. When performing with Mára live, I take into account how my voice occupies the space and can pass into peoples bodies. The quiet of the composition can produce intimacy.

As for heavy music:  after I gave birth, I felt ultra sensitive to sound and vibrations. I couldn’t listen to heavy music anymore, especially not music with yelling vocals/singing. Before becoming pregnant I liked a lot of heavy music, and also incorporated aspects into my own music making with Mamiffer and participating in my husbands band SUMAC. The photo/closeup of the record shelf I sent to you is a reflection of the records that don’t overstimulate my ears, and get played more often.
Now that I am moving further away from birth I can enjoy heavier music now, especially since there is so much good new music happening and I feel like I can appreciate all sounds again, and enjoy broader spectrum of sound.

In the other photos I’m quite impressed by the one with the black boxes/cases… what are these? I guess something related to photography, as I also see the “Kodak” logo in a corner?

Yes, they are negative holders for 4×5, 35mm and 120 format. I started taking photos in high school in 1994, and continued through college into the present day. They function as an archive. I also have all of my family negatives, and I’ve been slowly organizing those as well. 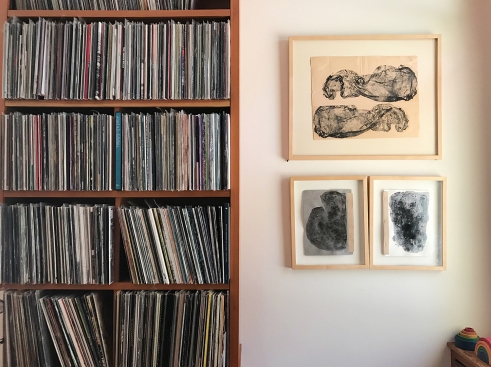 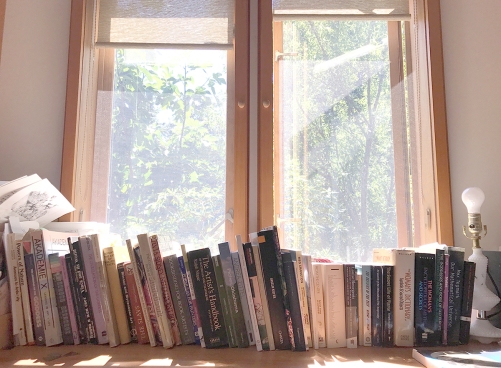 So you are also a photographer? I see quite a lot of books about other arts and two abstract paintings on the wall… Can you tell me about your approach to interdisciplinarity?

Yes! I feel like my natural creative home is photography, and I approach all my music making as an artist and photographer. Also around the time of my “body discovery” in 2008, music became a big interest for me in a way that I could condense my ideas into “units” of expression. I saw musical releases as a good vehicle to contain ideas in a manner that could be distributed and have a reach.
I went to Otis College of Art and Design in Los Angeles CA, and studied with two teachers who were very influential to me: Meg Cranston and Alex Slade. I keep their direction and advice with me in all of the artwork and music I make. My main inspiration for making music is painting, sculpture, photography and writing.

My approach to music making is similar. I honor photography as a medium to document. Part of my process is to document sound (field record), and create compositions using the archived sound documents as their basis. I am motivated by this: What is meaningful to me with sound, can convey a unique experience for the listener. Unintended or uncontrolled sounds produced by the cassette tapes (the limits of documentation based on medium), hold meaning within the composition and become compositional markers, and can produce feelings in me and the listener.

I was drawn to photography for its ability to be “magic”. Silver and light combine to make an image, functioning like the eye. Developing film and the magic of chemistry in the photo lab informs my work. The magic to “still” a moment, and keep it, or analyze it. In college I learned about the “Punctum” from Roland Barthes which was a pivotal moment for me and many of my friends in photography. The secret code of the photograph was also a sort of “magic”- especially when normal photographic markers disappear. These ideas are present to me in music making, where I use a sort of sympathetic magic to contain/collapse a time period or feeling to make a connection. 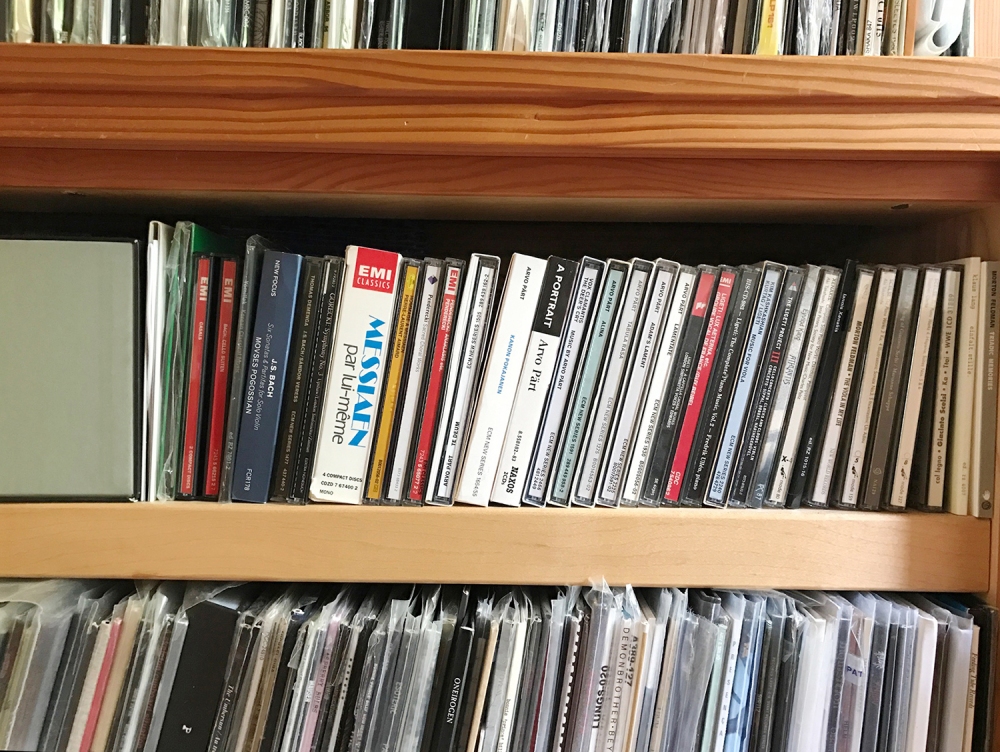 Faith Coloccia is an American artist and musician. She is most known as being the founding member and primary songwriter for the post-rock band Mamiffer. Coloccia has also been a member of Everlovely Lightningheart, Pyramids, House of Low Culture and Split Cranium. In 2009, she co-founded the independent record label SIGE Records with her husband Aaron Turner (Isis, Sumac). 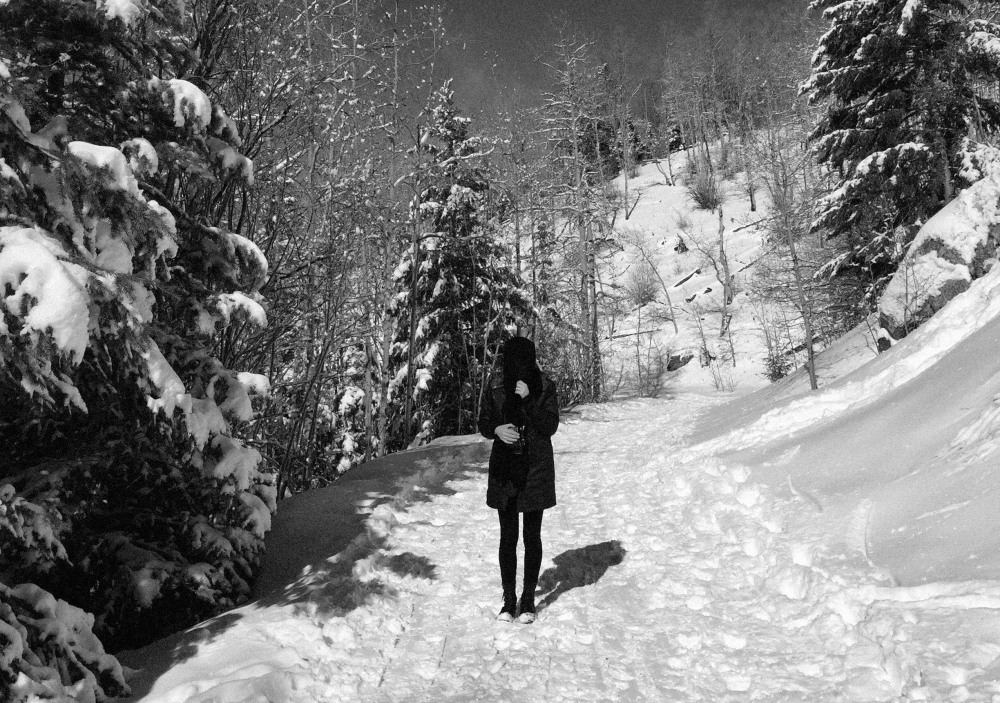