It’s pretty clear that you like cassettes, both as publisher of music, and as listener(s)! But what is nice and strange is to see so many ‘mainstream’ releases on cassettes, survived after all of these years, like Grace Jones, Prince… You know, it’s rare. I saw for instance many still having their dubbed cassettes, musicians that belonged to the ‘tape network’ in the past [you’ll see soon a post on Greg Kelley, quite amazing, or the one of Piero Bielli, of ADN, already on the blog.] Does this mean that you never got rid of them, since the 80s? Or you bought them recently? Usually there’s a phase when people thrash these kind of pop cassettes, because they change their musical tastes, or they buy CDs instead…

Yes we like cassettes a lot, not just as music carriers but also aesthetically, as beautiful objects. Album artwork such as the iconic Grace Jones’ “Island Life” photograph by Jean-Paul Goude transpose to this format very well, it is like the little brother/sister version of the vinyl. If you look at tapes from the 80’s you see they were really trying to adapt the artwork well to a non-square format, so this we find particularly nice. Tapes now have somewhat of a micro hype and can be a bit over priced… but we’ve both been into tapes for longtime. We’ve been buying tapes since the late 80’s, and a good proportion of them were purchased as teenagers in the 90’s back when it was normal to do so. The Flaming Lips or Minuteman ones would be examples of this. Others have been bought more recently in Paris at Monster Melodies or in Alba (Italy) or simply at random flea markets. We simply like to have them and most of the ones we find don’t cost very much since they’re no longer in demand. Taking a chance on a random find has always been an important part of collecting and with cassettes there isn’t much of a financial risk to keep impulses in check. We both haven’t really dumped any music in our lives. Sure we’ve changed our tastes over time, but even the most ridiculous music choices one might have made back in the day shape who you are now, right? And maybe that was a way to discover something better, so why dump it? I guess these things are conduits for memories and associations in ways that mp3’s simply cannot be.
We also have many dubbed tapes since it was very common when we were kids to split the purchase of albums between friends. When I was 13 (here Federica) my cousin and I were totally into The Doors (and we still are!). Since we didn’t have that much pocket money, we split the discography in two. I have only half the proper releases while she has the other half. No need to say I find it super nice when I go to her place and see that she still has the other half! Many tapes in our collection are also current releases from our friends from labels like Full Body Massage Records, Das Andere Selbst and Späti Palace as well as a lot of Berlin based experimental musicians. These are often the result of trading with other bands and artists at shows or tape markets. 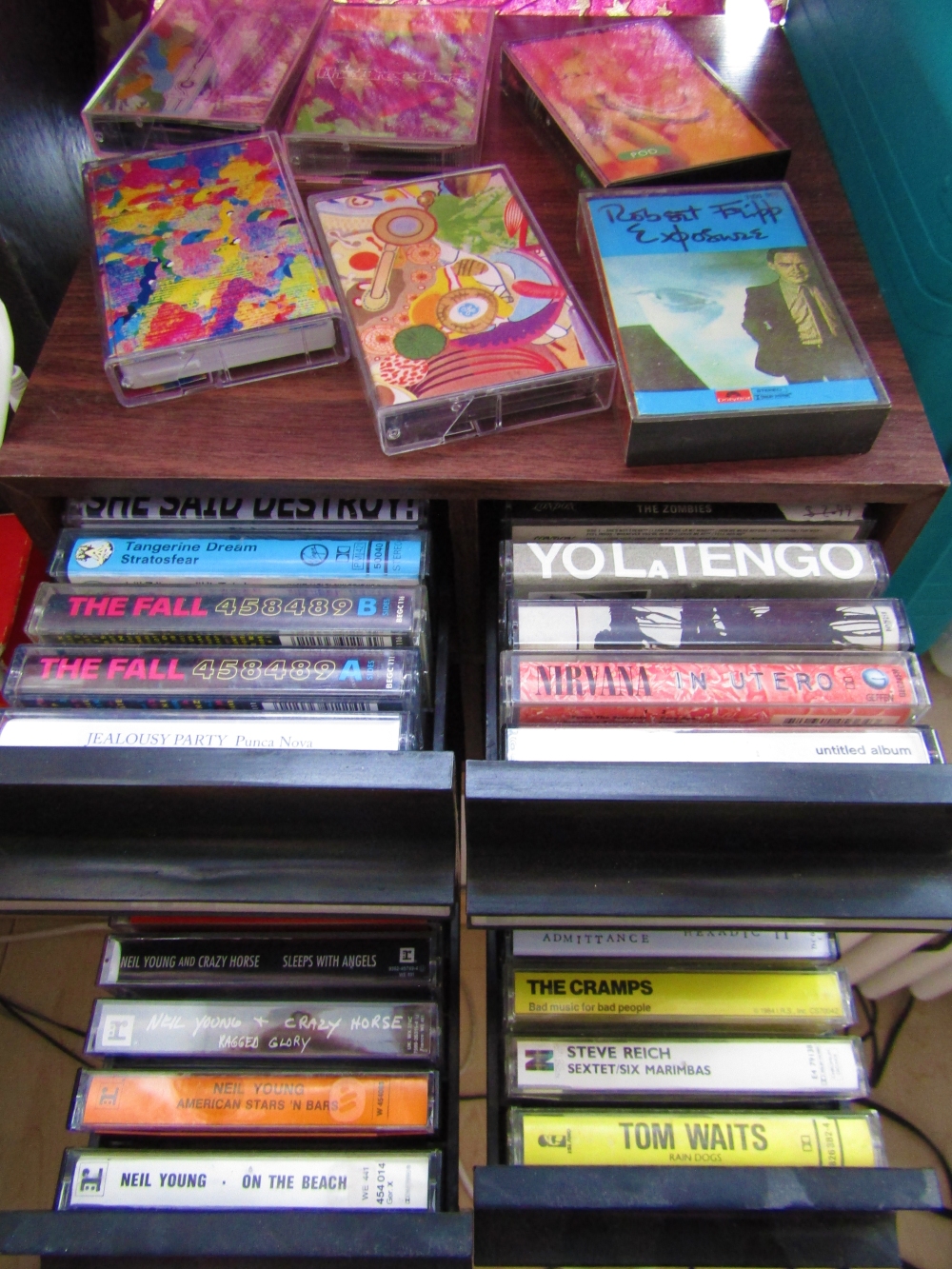 It’s sometimes hard, in the photos, to distinguish ‘real’ original cassettes from some whose covers seem to have been done by you, like you Kitchen Leg Records releases… Tell me about your passion for collage [and, if you feel like, take a look to the post of Michael Leight on the blog, he’s a very particular collage maniac!].

I think you are referring to the tapes of A giant fern, a tape label based in Leeds. They also do collage artworks and they are really great!
Andrew does all the covers for Kitchen Leg releases and they are all collages. He’s been making collages for a longtime and somehow the tape format became his prefered one. When we met he showed me the collage covers he did for the mix tapes he made for friends and I found them so beautiful that it became the main idea behind the label, more or less “weird intriguing upfront music with collage covers”.

Collage is fascinating. It allows you to work with intuition, unleashing creativity, but within a frame. There is no blank page to start with, you simply begin with your collected materials and manipulate it: adding, subtracting or shifting and in the process changing the meaning. The goal is to surprise yourself and create something you could not have foreseen or express something subconscious. We also use them as concert posters for release parties and often times they are collaborations between the two of us.

I noticed also other nice weirdos in the photos, like the robot of some of the Star Wars saga, right? Or the little green dog… What are these?

Our cramped apartment (nicknamed: “kitchen leg mansion”) displays a wide collection of oddities. BB8 is Federica’s, she’s a big fan of Star Wars. The green dog is a slide whistle. There is practically no musical instrument we wouldn’t mind having… you never know what will come in handy! We also have an ocarina, somewhere. 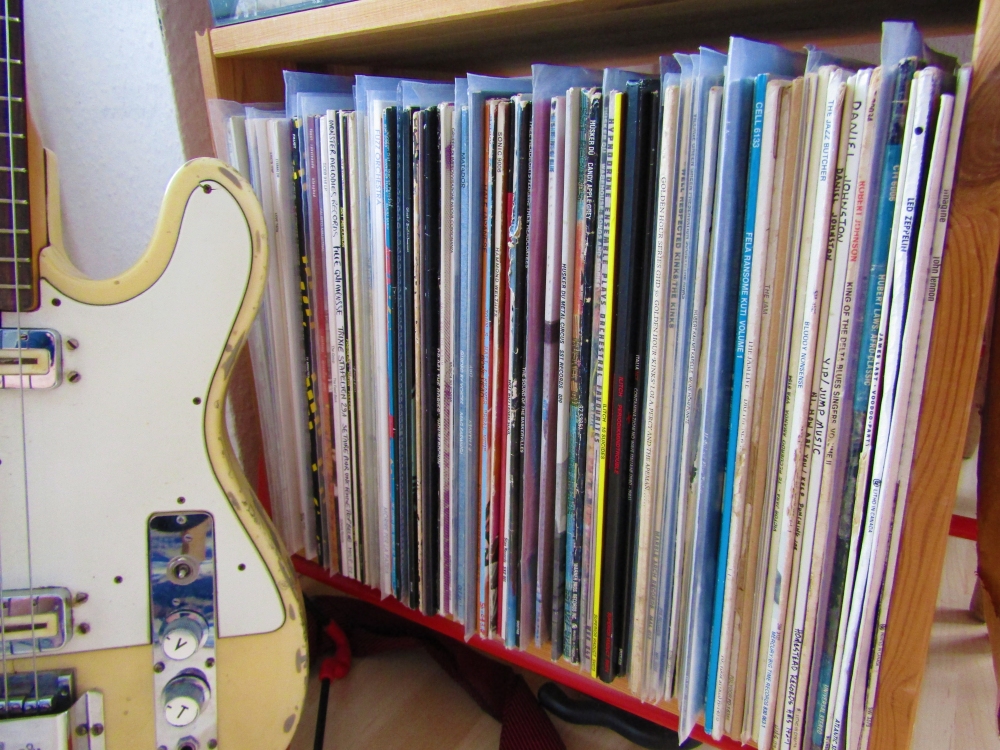 I see a keyboard, a guitar and many of your bands cassettes… you’re both also musicians, in many projects. Could you tell us about, in terms of your musical evolutions as artists?

A friend refers to our place as “fucking abbey road” because of the amount instruments in proportion to the space we have here. Once we moved in together the amount of records and instruments basically doubled. We both have practice rooms elsewhere, but we play and record music also at home. Luckily our neighbors don’t seem to mind. Federica’s main projects are her solo drone act, DuChamp, drone/ambient duo, Fausto Maijstral, and girl band with attitude called Brabrabra. She also occasionally plays in Roman Catholics and Xantene. Andrew’s main band is called Hit Gib where he plays bass. Together we play as Instant Voodoo, an electronic-kraut-impro duo that makes effective use of the living room as a practice space. Music is indeed a big part of our life, we listen to music or talk about music all the time, and we are a big source of inspiration and discovery for one another. We enjoy playing together, but it’s also important to have our other music projects. We learn a lot from playing with other musicians.

I’m not a gear geek, but I’m curious about the cassette deck I saw in one of the pics… Has it something special? Are you a sort of ‘tape audiophile’?

Happy you spotted! Yes, this is our beloved Nakamichi. It’s a japanese tape deck produced around the end of 80s-early 90s. It has great sound quality and low hissing. We only use it to dub tapes for our releases. We use another cassette deck for listening. Although we suspect a lot of people buy our tapes and then listen to mp3s from the download code, we know that some of our friends/costumers actually do listen to tapes, so they deserve top quality! We dub all individually, in real time. This is possible since we only do small runs. It makes things easier when we can control the quality of the sound ourselves. We like the freedom of producing how many tapes we want, how we want and when we want!

Federica and Andrew are the founders of Kitchen Leg records.