I love mystery. You took pictures of a pair of boxes marked as “dub” and with the Olympic circles. What’s inside? Relics of an unknown past, LPs of real dub music, 7 inches you kept from your youth…?

Crass: great choice. Are your roots in punk/anarchist culture, or is it more a ‘must have’? I really love the artwork of that album…

Apart from my DJ-records I only took my dub and my punk records with me… it seemed to be my ’emergency management’.
You know, when you asked me to take a photo of my record shelves, I thought:
“But he will not be able to see anything! ’cause he can only see the spines, photographed with my weak-cellphone-camera!”.
But then… the other day, I turned my head and I saw this random moment with Crass and Scientist and I thought: “Hey this is the perfect moment! It really represents my present collection: a little Punk and a lot of Dub.”

Cool, I like when Concrete Shelves participants take pictures going on their guts! I also see a lovely bunch of cassettes: some are very mysterious to me: the one with Arabic writings and the “Music to Hump a Trashcan To” in particular, but it’s funny to see Christopher Cross too.

Yes, I only have a radio-tape-recorder in the kitchen.
“Music to hump a trash can to” is Lumpy and the Dumpers (‘weird punk’) beautiful title, beautiful cover artwork hehe, check it!

The “arabic” is actually Geeta Dutt from India, which to me is like a sound-art-installation, like an abstract sound-bubble. It’s hard to explain… somehow immaterial.

Christopher Cross: crazy music! And I just bough it! I feel addicted to it… really don’t know why. It seems that I need extremities at the moment and in the kitchen it has to be either soft-rock or punk haha! 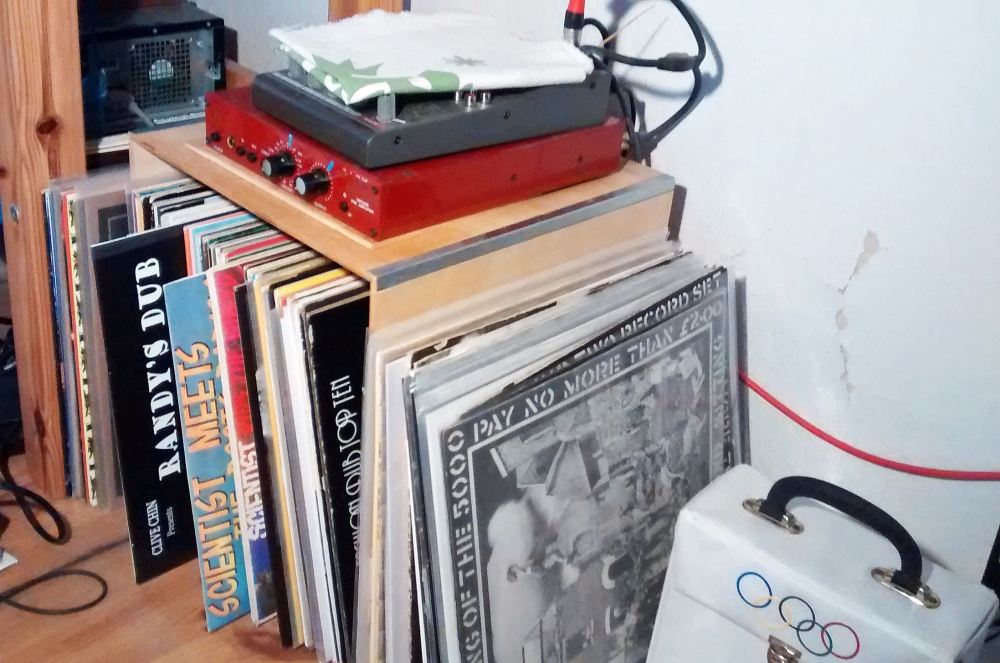 Ah, ok, I see. I can understand the idea of ’emergy management’! I also have some record that is sort of indispensable, to cover very bad mood moments or those adolescent times when I feel alone and I need (in my case) The Cure “Faith” or some very cold stuff from Ruythm & Sound. Which is the mood for punk like Crass for you?

I think it’s about the energy, I’m gaining physical and psychological energy through this kind of music, the latter through a little – let’s say – “consolation”, through the idea that there always were and there will always be some passionate, incorruptible people out there… and – ok I admit – with Crass there’s also a drop of nostalgia involved! But to prevent myself from getting melancholic, I go out and see a live show, because luckily in Berlin there are still some places where there’s good underground, contemporary
experimental, noisy, political, punky bands playing every week.

Anyway, you perfectly interpreted the spirit of Concrete Shelves just taking pictures that represent one moment of the presence of records in your house. So it seems you keep music in the kitchen, right? You have a big bottle of soya sauce! Do you like cooking asian food? Maybe when you listen to Geeta Dutt?

Yes, but it’s hard to concentrate on the cooking while listening to Geeta Dutt, she’s very demanding and I’m actually not a good multi-tasker when it comes to cooking.

I think I captured another nice random moment today, with Bad Breeding and The Carpenters!

Oh God! I knew The Carpenters, and I’m now discovering Bad Breeding… so it seems you really like justaxposition, right? Also your music is very rich in that sense, but in my mind you are actually making – as far I as personally know – rather quite music, the kind of stuff I love to listen when I need some welcoming, warm and delicate atmosphere in my house and ears. I’m referring to your solo works on Morr and Karaoke Kalk, or most of your collaborations with Harald Sack, or the ones with Nils Frahm on Sonic Pieces… where does the Crass enery is driven now?

Justaxposition, yes, or maybe a double personality: “Two souls, alas, are housed within my breast!” Well, I simply like people with passion and I like the whole range, so that seems quiet natural to me. And, yes, I actually feel it very slowly coming back to these days: the urge for noise. You know, until I was about 30 years old I did a lot of noise-rock, but then I suddenly just didn’t feel it anymore!
I remember that there was this instrumental song called “Greifling”, which led to splitting up the band, because I became softer and softer, listening to Simon and Garfunkel or Burt Bacharach while my drummer wanted to become harder and harder.
One day I composed this song, “Greifling”, a really soft and sensitive stuff, and I brought it to the rehearsal room. So we split up! Hahahaha! A then I started to play some chamber music, some minimal music projects like KINN and Sack & Blumm. Quiet music. And then i did “Mondkuchen”, my first record on Morr Music, where there are still some instrumental songs that I actually played with my noisy rockbands before.
I transcribed the single notes from the chords that I played on my distorted guitar, I mean, I wrote them down for myself, then I tried to transfer the chords into single lines
and then I played those lines on a flute or a keyboard.
So maybe now its time to reverse it all again, to bring back the noise!

So you’re now doing more noisy music again? A new project? Or nothing concrete yet?

Nothing concrete but I talk about “our band” with my new Swedish friend that I meet on these “melancholia-preventing” punk shows where i go.

Talking about your collaborations, I know you have a band with an Italian guy, could you please tell me about it? And about your experience living in genova, that also generated a whole field recording album…

The Italian guy is Luca Fadda, one day we were walking on the beach in Sardinia, it was winter, a very classical scene, like in a Rocky movie, when we discovered our shared passion for dub, so we founded the Quasi-Dub Development, “quasi” because we wanted to replace some typical dub elements and instruments with “wrong” instruments. It’s like: replace the bass with the tuba and then play the tuba with the trumpet… misunderstandings on purpose! The project is not very flexible, because we live in New York/Berlin and Sardinia, but the good thing is that we can play in two places at the same time, because whenever Luca or me are involved we can call it the QDD. It actually happened once.

The last question is: who is that funny grumpy puppy with guitar on the top of cassettes? You?

Oh I am so happy that you ask me! This is my guitar hero K.K.Slider! He lives in the world of that Nintendo Game “Animal Crossing”. One evening in the week (you have to find out when) he plays live at the coffee-bar, at Brewsters’ places… he’s great, his singing is fantastic!
The best way to check him is to play the game, so you gotta get a Nintendo DS ahah! I think he’s not really grumpy, he’s concentrated, he’s serving the music, not the show: his eyebrows look a bit like mine, that’s why I’m very proud.

Frank Schültge, aka F.S. Blumm is born in Bremen in July 1968. After a period of classical guitar training since 1978, he started to study art, music & educational-science at the university of Bremen. He now lives in Berlin since february 1997 where works as musician / composer and author / producer of radioplays. His works have been releases on several labels, including Morr Music, Karaoke Kalk, Sonic Pieces, Staubgold, Pingipung, Teto and Tokuma. In years he collaborated with other artists such as Harald „Sack“ Ziegler, Nils Frahm, Ellinor Blixt, Jeff Özdemir, Andi Otto, David Grubbs and more.