Crass, Napalm Death, Carcass, Godflesh… a lot of Earache and Southern Lord! Delicate, dreamy, minimal tunes like the ones you usually play in your albums. Or not? Well, are these listenings from your past or do you still have that side in you, maybe not expressed directly in your music?

The Earache stuff is a big part of my musical history. I was a teenager in the late 80s, and feel lucky to have witnessed the birth of grindcore and death metal in real time. That scene exploded in 88/89, and was the perfect soundtrack to my teens. I snapped up so many records as soon as they came out, so these ones that I still have are all original first pressings. I still listen to these, and they really connect me to a time when music began to be a really important part of my life. Also, that kind of music led me to John Peel, who championed it back then, and his radio show became my biggest musical educator.

As for stuff like Sunn O))) and Earth and those types of bands, I’m just a big fan of stoner rock and doom metal. I just love the slow, repetitive weight of it all, and it’s immersive in the same way the best ambient music is.

All the above stuff doesn’t directly inform the music I make now, although Brain Eno once said that Napalm Death played at a suitably low volume was ambient music! However, the atmospheres and textures of Godflesh certainly have influenced my music making.

I totally agree about playing violent music at low volume sounding like ambient. Not only Napalm Death but especially power electronics… It recalls to me the evolution of Yellow Swans, from noise to one of the most beautiful ambient records ever (for my tastes), “Going Places”. Talking about ambient and quiet music, I see 12k and Spekk nearly whole discography. I think your work can be collocated in ‘that area’ I really love, beside Eilean, Dragon’s Eye, Dronarivm, Home Normal… I think it’s a strage and undefined ‘genre’ that is not ambient, not neoclassical… what do you think connects such musical experiences? Sometimes I think it’s more a mood that a musical style…

Yeah, I really like that “Going Places” album too, it’s very dense and cinematic, and the drones have a very tactile quality. It was a great record to go out on, it sounded really heart-wrenching at times and I guess was the perfect thing to release before they disbanded. It was quite a noisy release for the Type label, but then again, I don’t think noise and ambient are mutually exclusive genres at all. Most of my favourite music lies somewhere in the middle, artists like Fennesz, Tim Hecker and Oval and the like explore this territory really well. In fact, it’s that distortion and texture that accentuates the emotional aspects of the music for me.

As for 12k, that’s easily one of my favourite labels. I’ve enjoyed seeing it evolve over the years, from really synthetic microsound, to more acoustic stuff and even folk music. It’s the sign of a good label that it doesn’t just churn out the same kind of music, I don’t think it would have survived all these years if it had. It also shows Taylor Deupree’s skill as a curator, which is all down to his sense of personal taste I suppose.

12k and all those other labels you mentioned tend to operate in a very interesting zone, like you said an “undefined genre”. I think this is the strength of these labels actually, it’s not easy to classify, they kind of exist in a slipstream where ambient, electro-acoustic and modern classical music is there to be reshaped and explored. You’re probably right that it’s a mood or some other characteristic that unites them. Minimalism, music-as-texture and sound art are also important common denominators. The music is often quiet, it requires focused listening and there’s an aesthetic to that idea which I think they share. I very much see my own music fitting into this area. A lot of that music incorporates field recordings and non-musical sounds as part of the compositions, and this is another connecting theme. I think the best art is hard to describe, you just have to experience it. 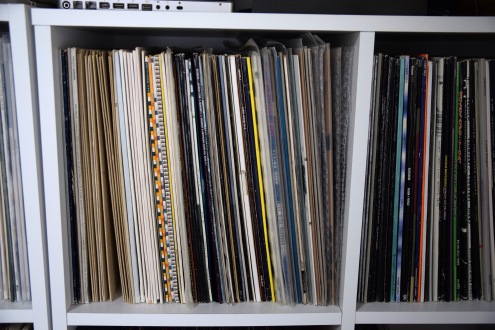 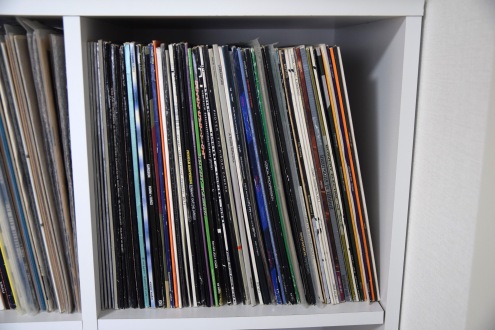 I also see Autechre, Pan American, Photek, Squarepusher… these are more ‘guessable’ listenings. So I suppose you are influenced by this electronic stuff from the ’90s and ’00.

Absolutely. It was following the likes of Mick Harris and Justin Broadrick into their side projects and collaborations that opened me up to electronic music, dub and avant-garde. I discovered Bill Laswell, John Zorn and Kevin Martin this way. Soon I was buying stuff from Warp Records and On-U Sound in the same way I had been hoovering up Earache releases a few years before that. That 90s electronic music fired up my imagination, and inspired me to make my own, so I eventually got an Atari and a synth and did just that. I liked the DIY aspect of it, a tiny studio in your bedroom where you could just explore sounds without any formal musical training.

You have a Buddha Machine and another strange machine beside it, what is it? And several Japanese records. I know you like in that country. What brought you there?

The Buddha Machine is one of the original ones, so it doesn’t sound so good now. The thing beside it is actually a USB stick, it’s a compilation on the TXT label. The books to the right are issues of Improvised Music From Japan, a series that ran in the early 2000s that included CDs of work by the artists featured in the books. I came to Japan in 2000, and at that time the “onkyo” scene in Tokyo was at its height. I loved that very quiet, improvised electro-acoustic music and it definitely steered my own music making in a direction that was more free-flowing and minimal. I originally came to Japan to teach for a year, but it’s now my home. Cool. What do you teach? There are quite many people in the musical field that work in education at different levels.

I teach English here, so nothing involving sound or music. The only connection is probably naming titles for tracks, which is kind of an art in itself and something I’m not as good at as I’d like to be.

Well, Japan: I’ve never been there, but many here in Europe are in love with that country. You mentioned “onkio”: how is your relationship with musicians of that area? I didn’t see any collaboration with Japanese musician with you. Maybe I lost something, you are not interested, they are a ‘hard to reach niche’, or it just didn’t happen?

Not so much those “onkyo” artists, but I have done stuff with Japanese artists who work in a very similar field. I had a live improvised collaboration with Hiroyuki Ura many years ago called Content In A void, and there is a live recording released that can be found on my Bandcamp page. I also did an album with Tomotsugu Nakamura under the name Suisen. We released a CD on Chihei Hatakeyama’s White Paddy Mountain label called “Just Under The Surface”. Most of my collaborations have tended to be with artists from other countries, as the internet makes this a possibility.

Did you see gig of any of the recent extraordinary Japanese bands like Kuruucrew, Goat, Kukan Gendai…? From here they look pretty incredible (as Gerogerigegege or Masonna in the past, but less disturbing).

No I haven’t seen those bands. In fact, I don’t really keep up with that sort of stuff so much these days, but I’ll totally check out the names you mentioned! I think the last really intense show I went to was Merzbow and Ryoji Ikeda playing together, but that was a couple of years ago. Most shows I go to tend to be more on the quiet side, small venues or galleries, that type of thing.

Darren McClure is from Northern Ireland, now living in Matsumoto, Japan. His music focuses on texture, space and atmosphere. Sound sources are both analogue and digital, incorporating found sounds and field recordings to lend an organic, tactile quality to the pieces. His main intent is to create sound to both zone out to and zone into, a balance of widescreen drones and more minimal, abstract ambience.

He has released solo and collaborative work on a number of labels, across various formats. His music has also been used in conjunction with video work and documentary shorts.