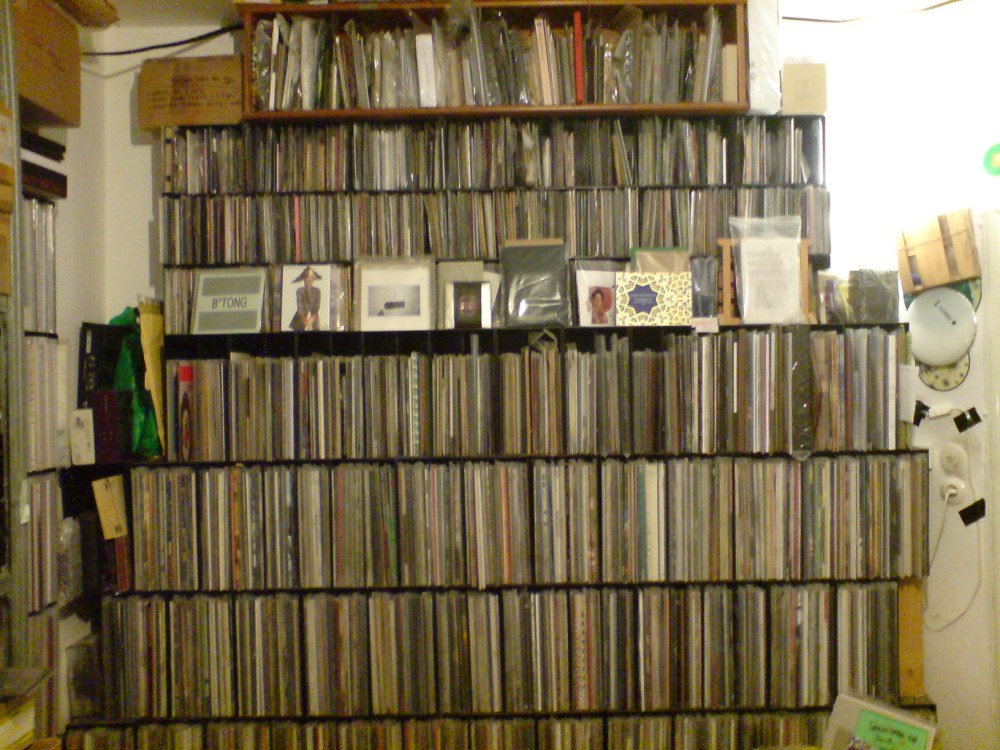 The first word that came into my mind watching at the pictures was “precarious”, or “insecure”… there’s a lot of stuff, not only records, and seems to be very close to collapse one day. But at the same time, it looks solid. Do you think it fits your attitude to music somehow? Troum are (for me) a bit like that, every track or album, or concert, is a mixture of unpredictability and strength.

Thanks, I think you have interpretated it quite well! We always thought our music with Troum shares a kind of fragile beauty, or you could also call it a somehow “diseased” beauty.

And my little apartment is completely stuffed with records (from label, mailorder, and own collection). The photos show only the “private” part. The stock-room, where I also pack the parcels, looks much more chaotic, eh eh. At least for visitors.

It’s an interesting theory that the ‘outer space’, the environment we live in, is a kind of symbolization or ‘physical’ transformation of the inner psyche. The shelves are packed completely with ‘information’, with ‘cultural objectifications’, they seem to be fragile, chaotic and could collaps soon indeed. On the other hand, it shares a richness of (possible) emotional experiences, it’s colourful and vivid.

That’s how I often feel, indeed.

And yes, it also shares a good portion of solidness (in fact these shelves never collapsed, and I live here since 10 years), the same you can find in Troum, there’s usually always a solid ground in the music exisiting, some structures deep below, too. 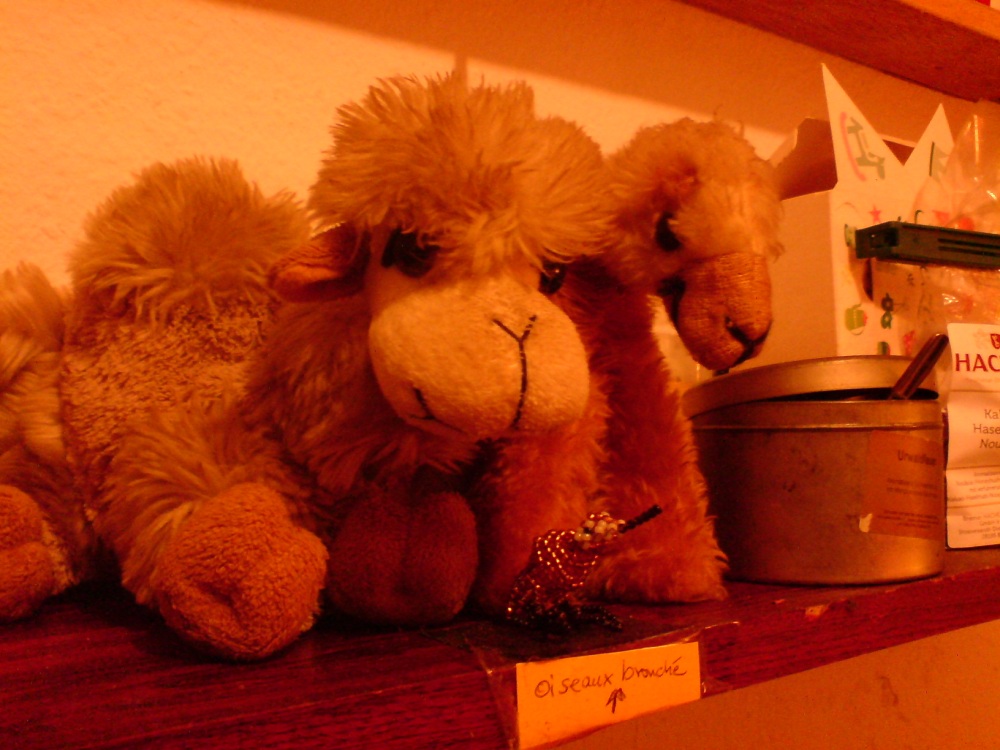 What is that ‘oiseau blanchè’? That puppet? Why did you take a photo if it?

The stuffed animals and the ‘oiseaux blanche’ belong to the shelves, they live there, (they’re in fact from my girlfriend) and they protect the shelves. They’re a kind of twisted totems, not deadly serious.

In fact, those photos are from my kitchen, it is also used for storing stuff (mainly old tapes).

So you can also see there things for cooking in between, like spices and oil. 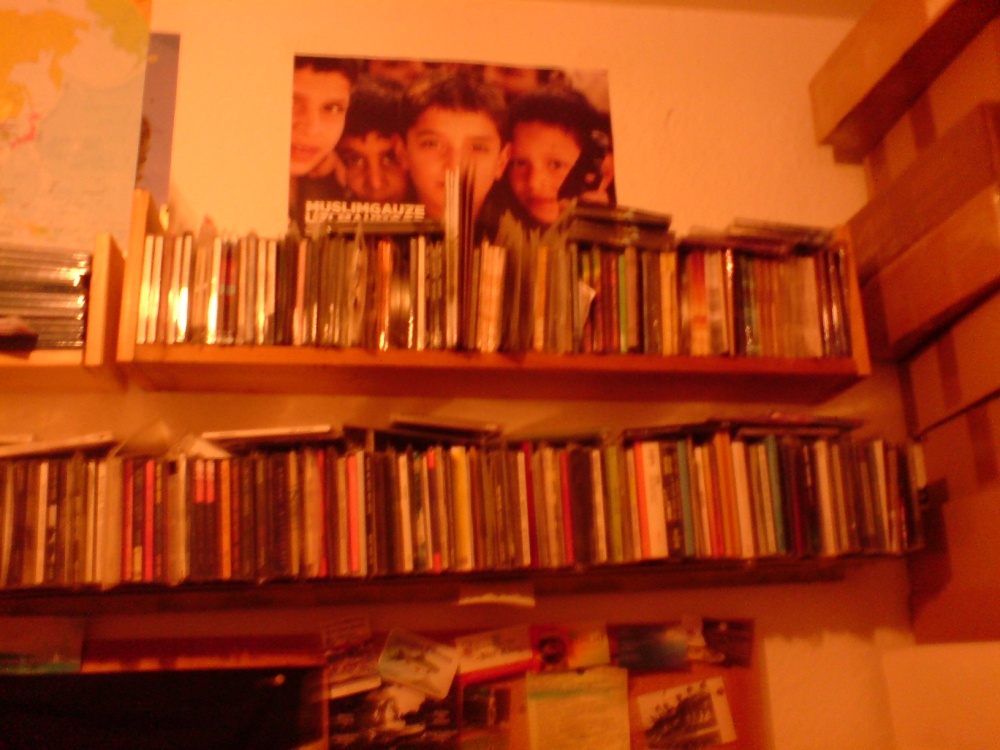 The Muslimgauze poster is one of the few recognizable things around. Is it just by chance or he’s a major influence for you?

I once got it from Soleilmoon Records, it’s hanging there more by chance, as at that time this space on the wall was still free.

Getting back to the topic of precarious things, what is the cable stuff I see in one of the pics? Looks pretty dangerous and mysterious…

Haha, this is a part of my P.A. speaker system, again, there wasn’t enough space in the room to arrange it in a better way. You can even touch the cable without getting an electric shock. 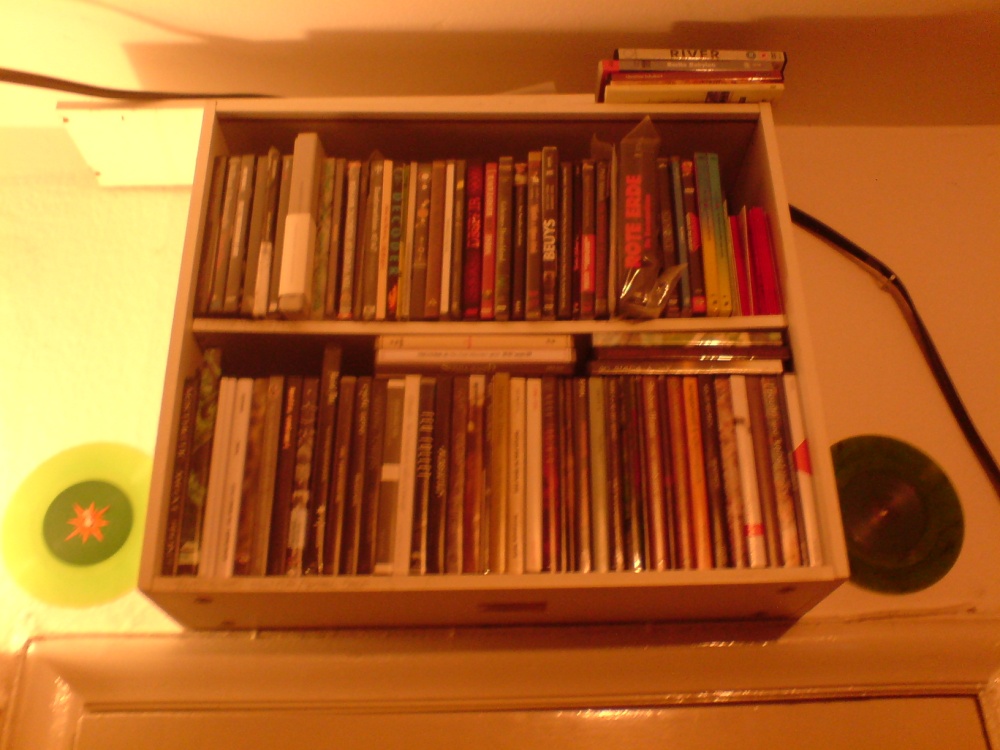 I see two nailed 7″ that seem to be your Drone Records stuff. You define, in the website homepage, your label as “very idealistic, uncommercial attitude & philosophy”. What does it mean to be ‘idealistic’ for you, in 2019?

This is how it started back in 1993, the texts relate to that time, being active in the hometaper & DIY scene, where exchange and communication was more important than earning money or getting famous, some labels even resisted to make ANY profits to be complete free of any “capitalistic” needs. I can’t be as radical as this with the label nowadays, as I try to make a living with the label & mailorder, but surely this original approach is still effective and essential.

This idealism means – also today- to support this special type of music with the belief that a wide field is opened for personal growth and development when you leave the borders of standardized music behind! To immerse in “sounds and noises” means it’s more than music, it’s a way to become more sensitive and perceivable towards sensations and consciousness processes. This idealism means to invest lots of time and energy to spread these forms of psychic sounds. “Drones” exist as long as the humans and our planet exist and they are deeply connected with our vey core being, I’m sure.

Or one could say: This music gives you the chance to make deep experiences with sound that transports you to “different places” than the ones our ‘modern world’ is known for.

I always also wondered why you decided to publish those 7″ in a field of dark ambient or related, as me, as a listener, as many other I suppose, usually prefer to ‘drown’ for longer time into such kind of composition. But at the same time it works.

Indeed, it’s unusual for this kind of music, but I always thought it could be a great “starting” experience to confront yourself with these drones on such a format. The attention is higher if you play a 7″ and you are about curious what’s on. And it’s the absolute opposite of what you might expect from a 7″ vinyl in the past (a short pop music hit), expressing already this way that this is something completely different. 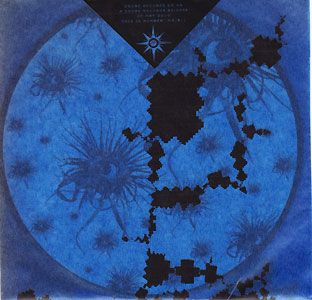 Still about the Drone releases: you contributed to the glorious return of Cranioclast, one of the most mythological and mysterious bands in the field of ambient industrial. Would you tell me something about them? I suppose you met the guys from Hagen…

Yes, we meet them on concerts with TROUM or MAEROR TRI, but I can’t tell you too much I’m afraid. It’s a duo and both appeared to me as pretty “normal” people, not mythological ones! But indeed they didn’t want to give too much explanations about their art or their personal lifes, for which I have great respect.

Stefan Knappe is born in 1969 in Leer, Northern Germany, and founded his
first experimental band in 1986. Since 1988 he’s active with MAEROR TRI, and since 1993 with DRONE RECORDS as label (starting the 7″ series) and later also as mailorder service.
Since 1997 Stefan is active with TROUM and lives in Bremen.
Apart from music, he studied Psychology and wrote a diploma about the topics of Psychoanalysis and the Unconscious in connection with atmospheric music of “drones and noises” (2004).
As psychologist he keeps researching on the depth effect of sounds and noises, beyond established music concepts. 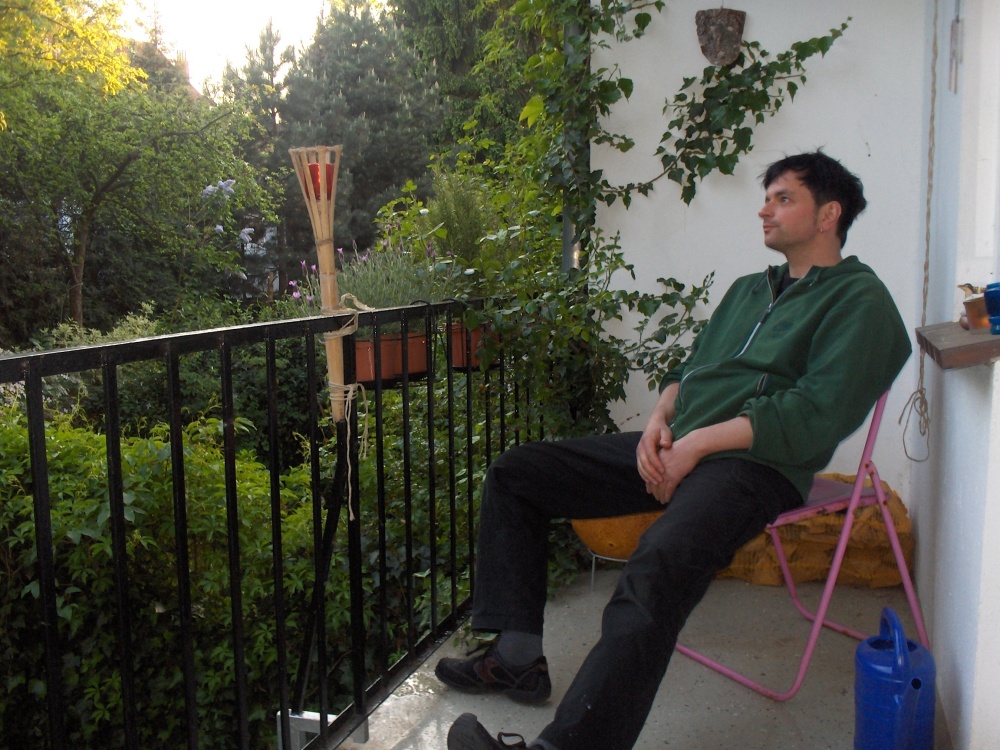