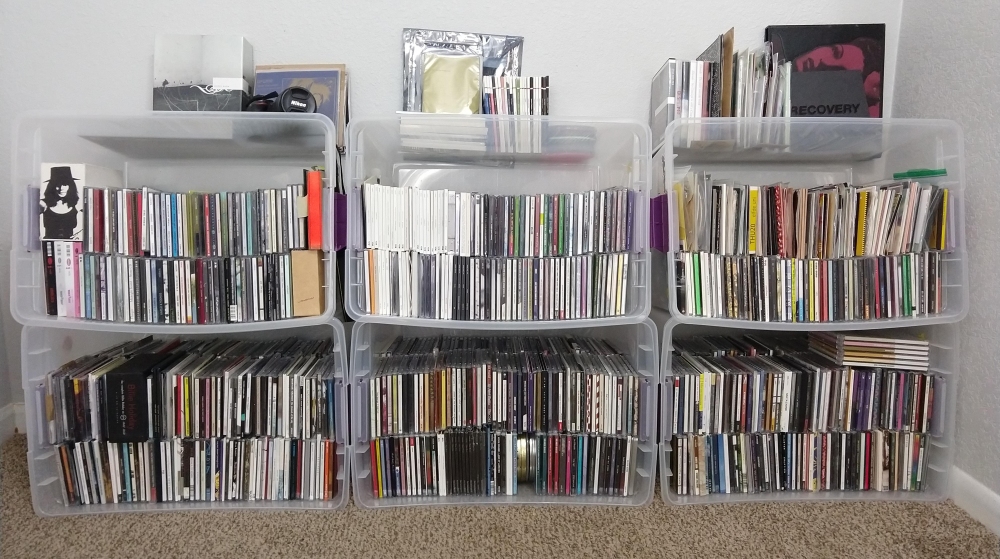 Oh God! You use robust plastic boxes to keep your CD… how can you reach the ones in the back? Are them packed this way so you can move the whole thing when needed?

Laugh out loud. This is an unfortunate state of transition, I know how it looks from the outside, but being an artist ‘gypsy’ I have had to relocate many times over the years and have found this to be the best transportable/storage situation for me. It has led me to a lot of terrabytes of sounds on my Drobo in the interim. That said, I absolutely abhor them put away like this. There is light in the tunnel, however, now that I am married and we bought a house here in Fort Worth, though it needed some adjustments on its 70 year old bones recently when we upgraded the foundation. Finally I will be able to build an entire wall dedicated to my library of music. But talking with you allowed me to uncrate at least these eight boxes (of sixteen) to see some of what loomed to the top. Some things I hadn’t seen in years, honestly. It’s like re-opening a treasure chest! Once I build this new wall which measures about 14′ x 10′ I’ll be able to better re-organize, but thought the transitional stage here would likely be visually interesting, and a hard document of life before shelving. Believe me, at nearly 53 I am no longer a college kid. 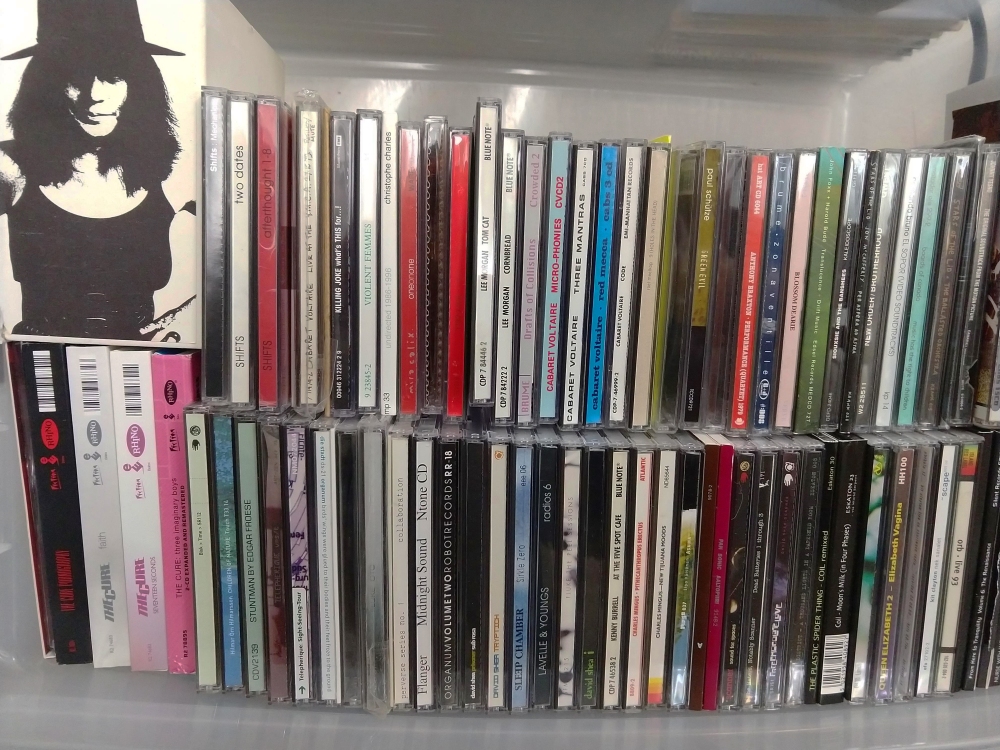 I notice some sort of order, by the way, with one of my favourite bands ever, The Cure, all together. You’re one of the first here in this blog to have those records from Robert Smith’s band… are you a huge fan? What is your beloved one among the records they issued along all these years?

You mean disorder. Packing and unpacking these numerous times has taken away my alpha (by artist) categorization, also I noticed my additional subcategory of ‘by label’ library has gone to absolute shit. That said, again, it’s like little discoveries when you dig things out in this way, rather than finding something right away. It’s only time now, when I erect that wall of music! Because of this collected chaos I am prone not to buy much music in physical form until I can see the spines in real time – that way I will prevent double-purchasing multiple copies of the same record, I’ve done that a few dozen times over the years – not the same from my vinyl collection days – which are long over. At my peak I had nearly 25K records.But you just can’t get things like colored vinyl or remember that Split Enz record with the holographic etching? I miss the big graphics mostly, but am perfectly fine with my CD collection. I do have about three dozen obscure newer vinyls by people like John Duncan, Masami Akita, Hafler Trio, Beequeen and others somewhere in other storage but in one of my last two moves between the Pacific Northwest and Texas my trusty player was busted and never replaced.

Hands down, ‘Pornography’ is my go-to Cure record with ‘Faith’ as a worthy second. Just a few months ago I realized that I had never seen them in concert, which is so odd. I go way back to about 1981 when I first hear them, the gloom factor was there, the blur and dark melodies – however it was really ‘Let’s Go To Bed’ likely one of their first true ‘pop’ songs that grabbed me, I got that EP which was spectacular. Honestly, though, I can listen to most anything they made until the late 80s, after that it gets few and far between for me. Robert Smith + co. never disappointed me until I saw him wearing high-tops and the perma-smudged ruby lipstick, I guess I gently hate branding. Though in the last few decades they’ve put out an interesting track here and there, though no solid full-length. So it’s the seminal days for me, and Rhino does it right with those generously extended sets! 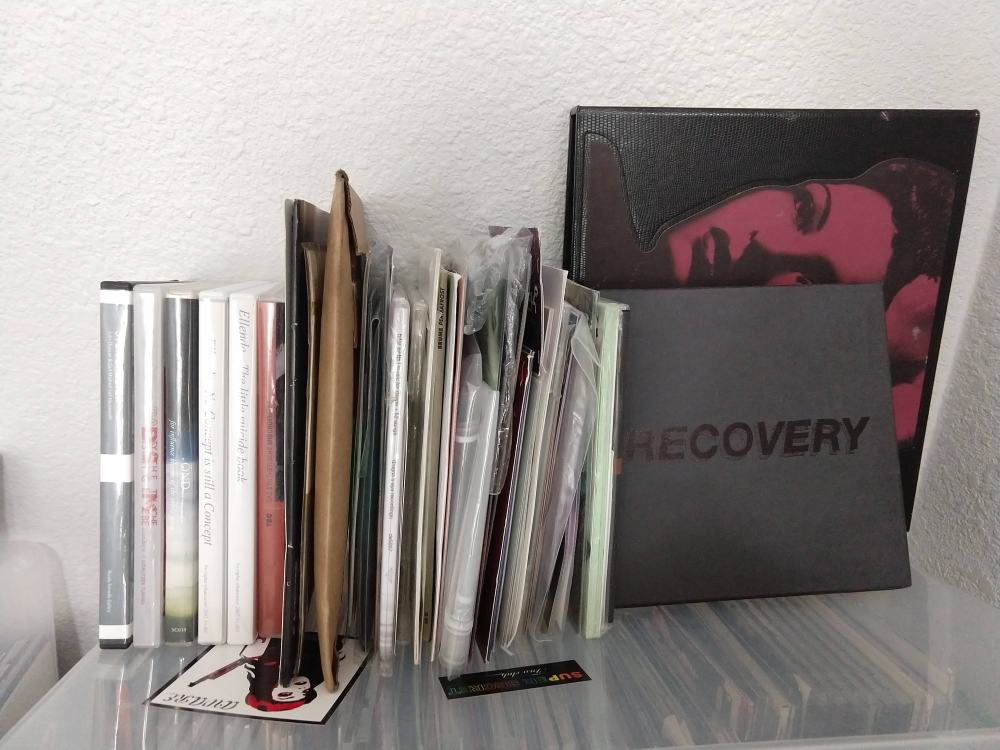 I noticed two charming women I can’t recognize… one is above The Cure, the other one is the purple one on the top right…

Do you mean the ‘Onobox’? That is essential listening. Her work resonates with my post-fluxus/dada aesthetic. One thing I always appreciate is that people have a true visceral reaction to her, music or her place in cultural history. Most people only have a tiny slice of her eighty plus years. She’s a brilliant artist. Her new album coming out in a few weeks is incredibly emotional, mournful, strong, poetic, lethargic – she’s letting people have it. I’m not sure about the purple one you are mentioning – is it the Billie Holiday Decca Recordings set? I think I have all her material on Verve and Columbia as well. Her voice paved the way for so many to follow but she is one of those soulful originals with so much passion in her voice. Along with Abbie Lincoln and Betty Carter, I could listen to these ladies’ voices all throughout the day, from morning ’til being lulled to sleep at bedtime. Holiday’s voice has a ‘lived’ flair that so many have tried to match, but she is the O.G. 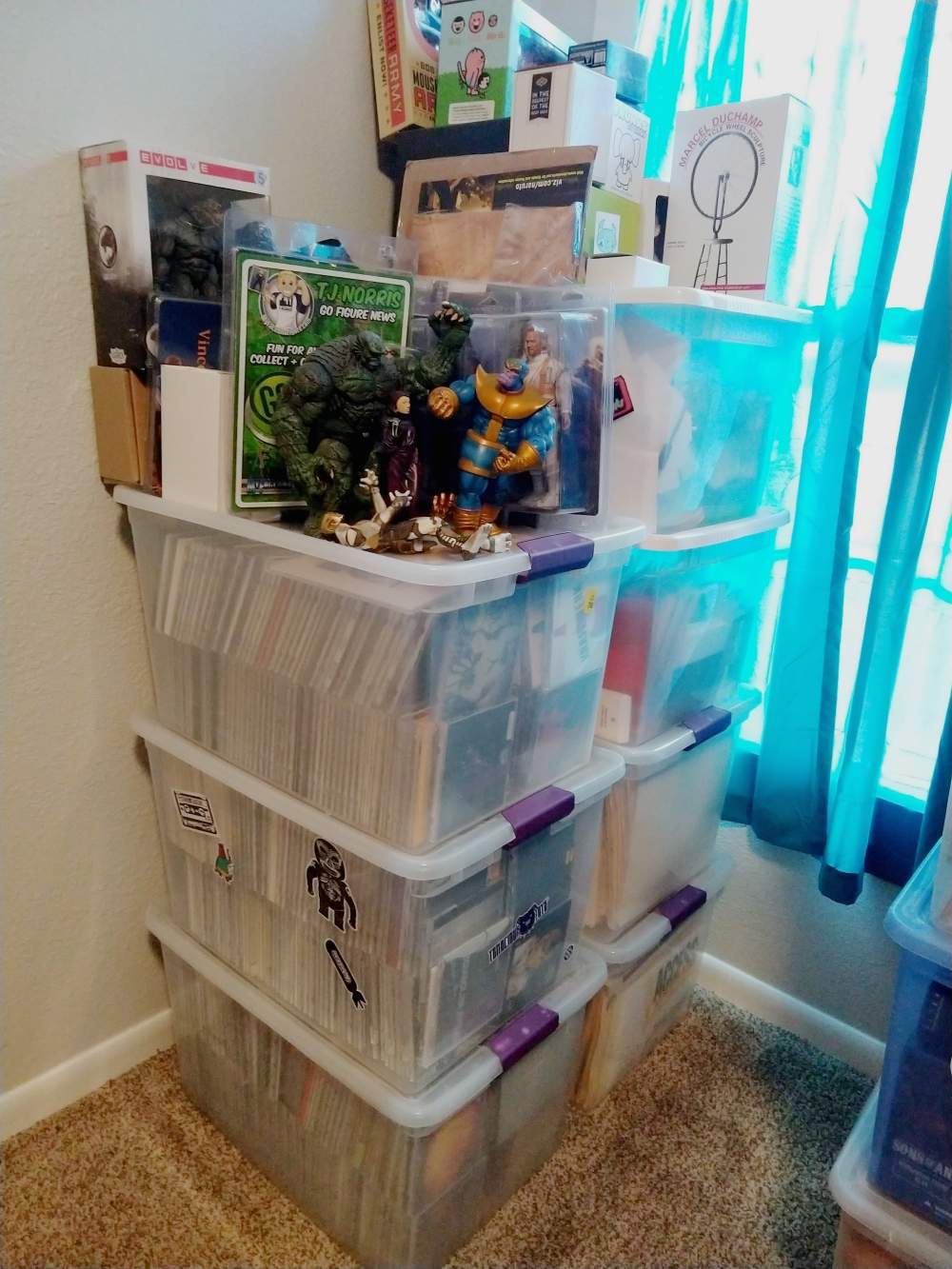 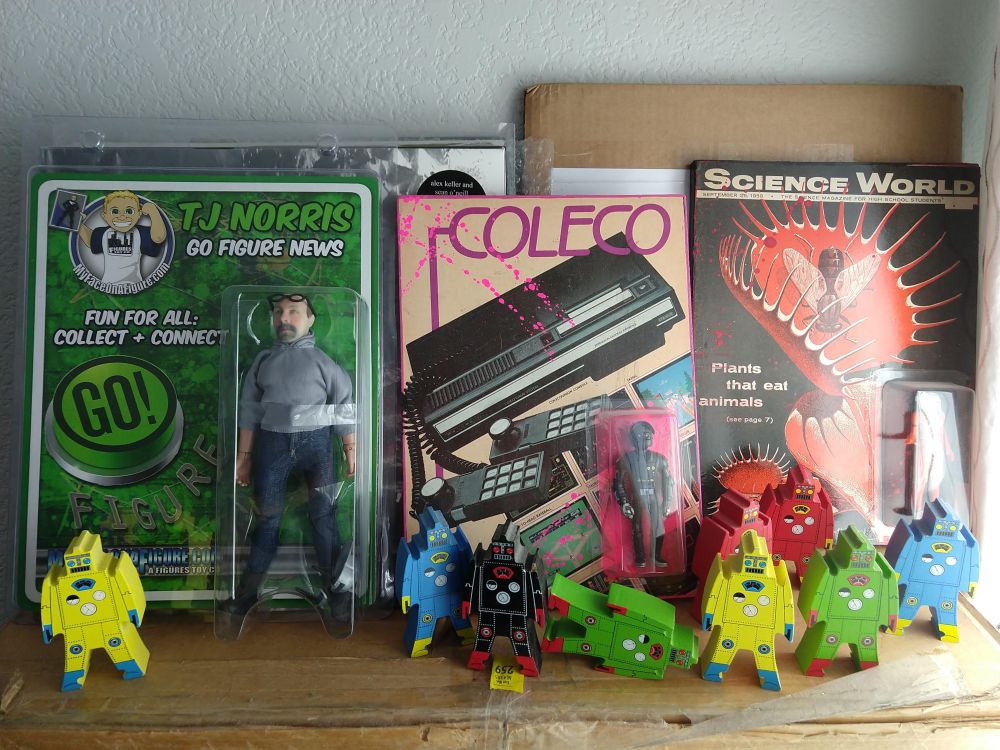 TJ Norris figure? What is this?

Oh, I was showing you the other half dozen boxes that I was too tired to lug around and open. But I think you are pointing out the ‘unofficial’ TJ Norris action figure that represented my time as a designer toy publisher. The now defunct (I love that word) Go Figure News ran for nearly five years and grew out of my former collecting passion. There was a company who wanted to show off their product and commemorate my work with my very own likeness. It came out pretty good, they even gave me some round spectacles and a similar salt/pepper gotee! The web magazine was nominated for Designer Toy Awards for Best Blog and Best Media Outlet for two consecutive years. I got to fly to NYC for the festivities which were held in what was the former Roxy Club (which I hadn’t been to since circa 1982). The place still had the same vibe, a little cleaner, but still had punk rock bathrooms downstairs! Also in the picture are two one of a kind pieces by the Sucklord (you gotta look him up if unfamiliar). I think these must have come from some Chinatown dumpster dives?! I interviewed him at his studio. 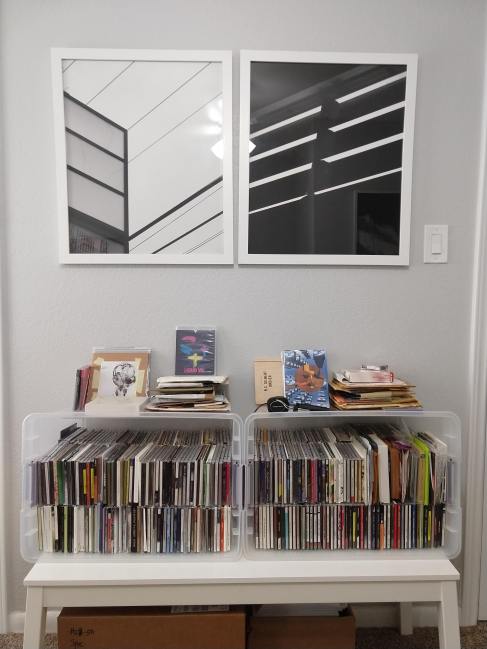 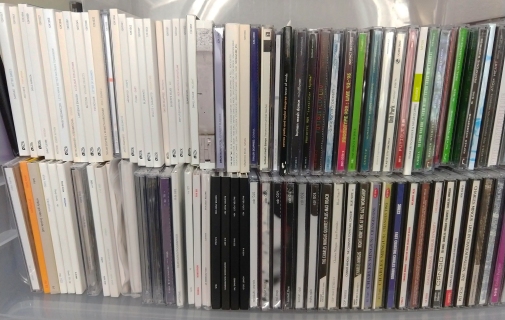 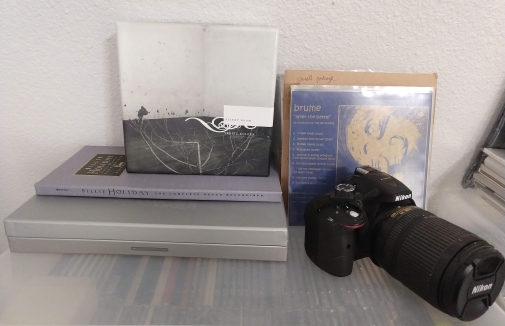 Well, the camera… I know you’re (mainly) a photographer… and I see many records of labels that used photos for their special artworks, as 12k of Taylor Dupree, also recently here on CS. I also noticed two of your photos framed above the records…

So, thanks for noticing, yes, I am a photographer, and these works are two of many from my ‘Shooting Blanks’ series (2008-2013). The monograph for this project was just released in a limited edition. I shot about 4000 pictures of industrial signage at the height of the American recession in sixteen of the United States. It was a big undertaking, and it’s a series I’m quite proud of, and took some time to get the publication out.

As a curator and collaborator I have also worked with a handful of sound artists and composers to create an image for coverart here and there, a new one by Belgian artist Peter Wullen was recently released via Gipsy House Recordings where he used one of my ‘light studies’ for the cover. It’s awesome that you connected with Taylor, I curated his work into an international juried exhibition at the now defunct Newspace Center for Photography in 2008. Wow, that was ten years ago, holy cow. His work made the cover of the lil’ hardback book we made to commemorate the occasion. Also included in the very same exhibition were pieces by soundmakers: Skoltz_Kolgen (they appeared on 12K as well) and Steve Brand (who was also known as Augur). 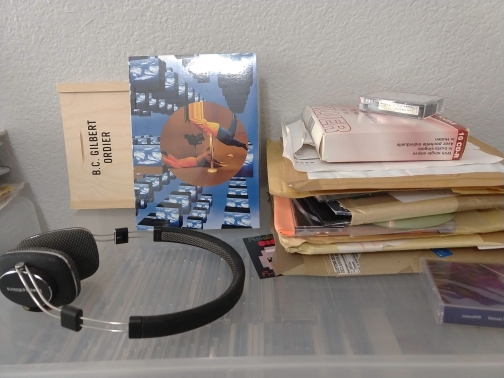 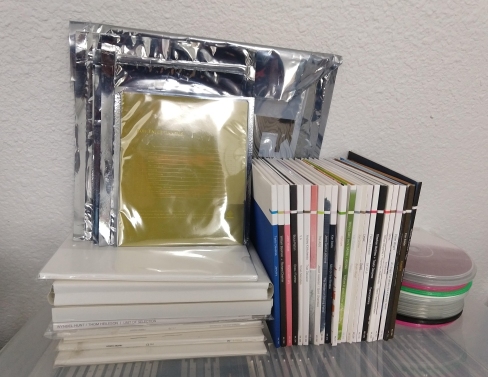 I also remember the “Trimix Project”. Could you please tell me about it and the relationship between sounds and images?

‘TriMix’ (2006) on Innova was a quasi remix project of installation soundtracks that I commissioned for my gallery work. I had created three gallery installations: ‘Genometrics’ (shown at Soundvision), ‘Nucleo’ (shown at the defunct Chambers Gallery) and ‘Infinitus’ (shown at the defunct New American Art Union) between 2002-2008. I worked with Beta-lactam Ring Records to produce ‘Tribryd: Installation Soundtracks’ (2003) which were the actual soundtracks that would be used for these exhibitions where I collaborated with Scanner, Asmus Tietchens, Illusion of Safety (who played live within the space), Beequeen, Rapoon, Aranos, Marc Behrens and others. Some of the work was played in the gallery space, some was within sculptural pieces, some was incidental, others were accessible via listening stations set aside the works. To create the work, the premise was fairly simple, I explained that the work would relate to the city, to an urban sensibility, to walking through a city and capturing changes posed by Mother Nature, by the human hand, etc. In the case of ‘Infinitus’ I worked again with Christian Renou (Brume) who created a seventy-two minute soundtrack which would be played on a loop in the gallery. The audience were invited to lay upon angled lounges (constructed for the exhibition) to look at the ceiling where I had a suspended ceiling screen on which a silent black and white film of the same length as the score played forward and backard, upside-down and rightside-up on two separate screens. The lounges were set up so you could view from either angle. 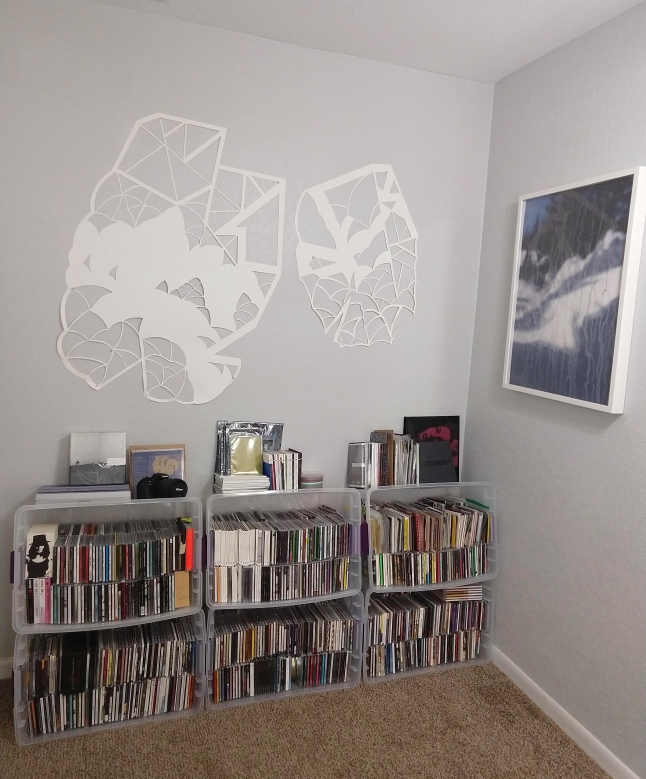 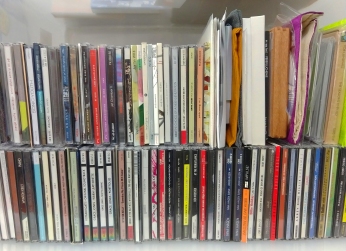 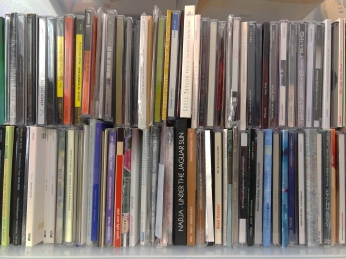 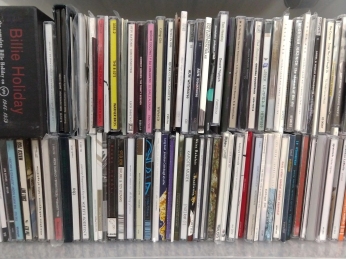 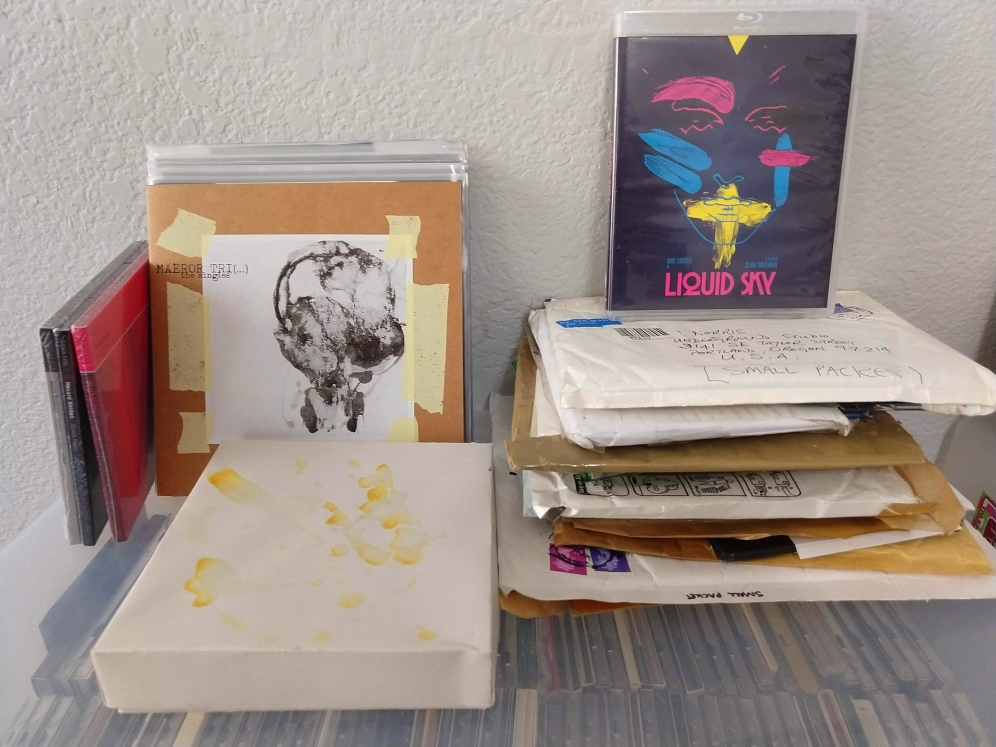 TJ Norris is an interdisciplinary artist (and contemporary art curator) who grew up in New England, now residing in Texas. His work has been shown in North America and in Europe and is housed in the collections of the Fuller Museum of Art (Massachusetts), Museo de la Ciudad (Mexico), Vanhaerents Art Collection (Brussels), Visual Chronicle Collection of RACC (Oregon), and the Kimmel Harding Nelson Center for the Arts (Nebraska) among many others. He publishes reviews via Toneshift.net daily and has written for MIT Press, ArtNews, Willamette Week, Signal to Noise, OregonLive.com, Paris Transatlantic, Igloo Magazine and Resident Advisor to name a few. 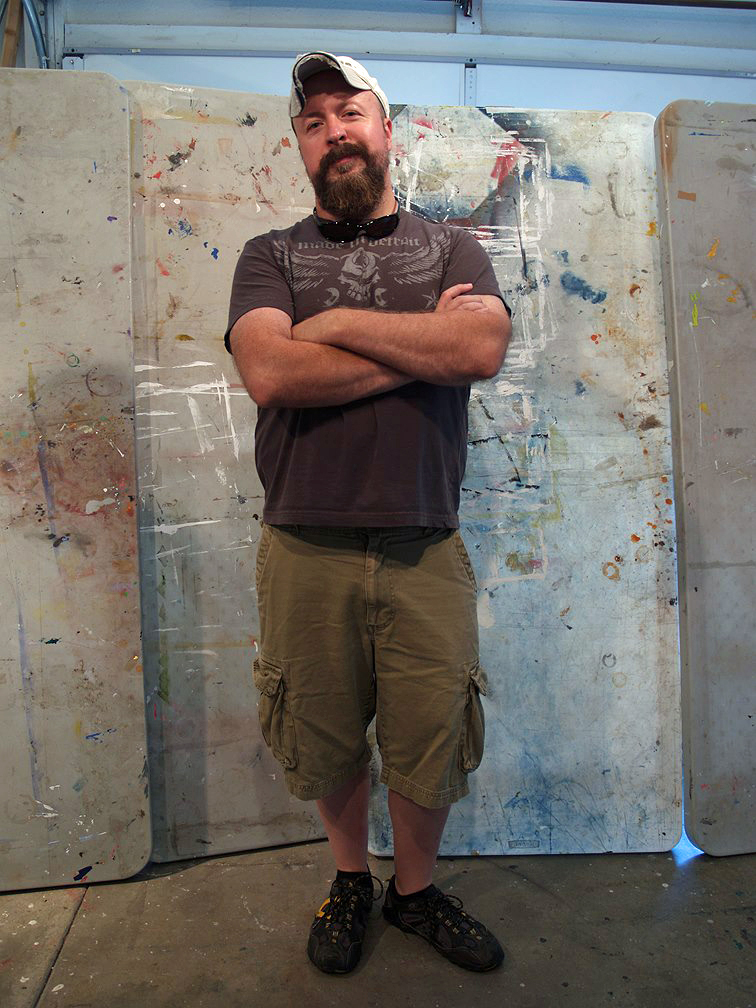