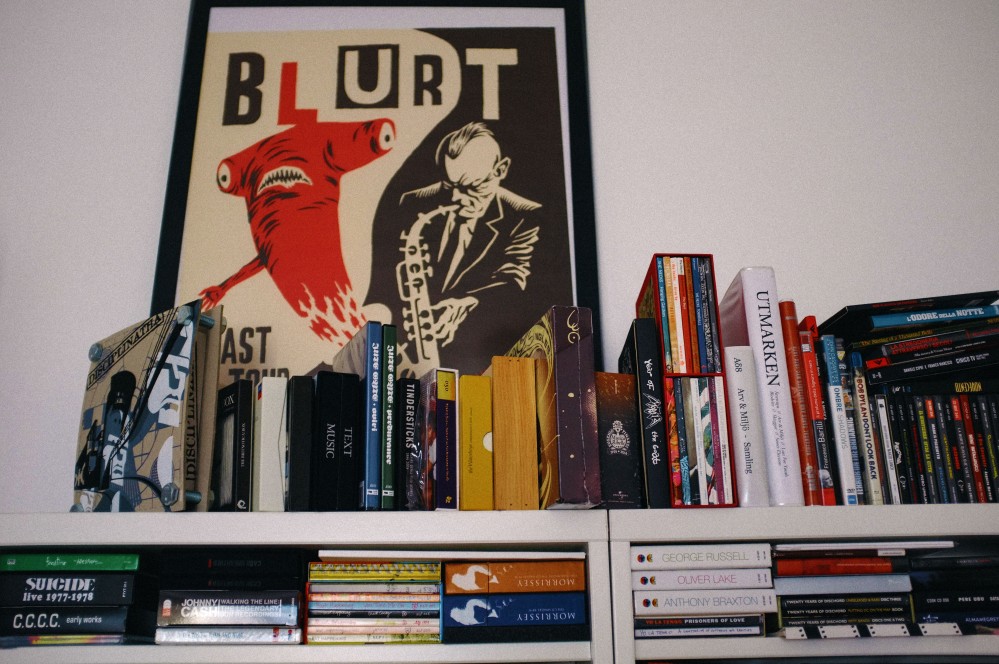 First of all, congratulations for the good shots! These are well done pictures of an impressive collection of records, kept tidy and mixed with interesting books, posters and mirabilia… But the thing that I’d like to hold on my hands is the Disciplinatha strange packaging on the top left of the CD shelve. They’re a controversial band, but years ago I met Cristiano Santini and I found him a very nice and professional person. I somehow remember that Yello Biafra declared that they are the only Italian band worth listening. What do you think of them?

Honestly? I like them musically, quite a lot. I met Parisini and Maiani a few years ago when we organized a screening of the documentary in my hometown: the venue was crowded with some “controversial” local personalities and I can say I wasn’t very happy. Maiani was nice, Parisini looked like a giant poseur to me. Unfortunately I never met Santini.
I bought the box set that night, it wasn’t cheap (maybe 60/70 euros) but I see that at the moment its prices are crazy on Discogs. I read that there’s some sort of reunion going on, and I’n not sure I’m interested as their “ambiguous joke” it’s not so funny anymore, especially in this historical moment. The box set is great, anyway, I don’t recall liking the documentary, I’ll have to see it again.

(Thanks for the compliments about the pictures, I recently bought my first 2nd hand digital camera after years & years of shooting film and I was playing with it and Lightroom on a lazy sunday afternoon while listening to records and watching Netflix).

Ah ok, so this explains the creepy image I see on your TV set on the back… But in general it seems you also like cinema a lot. What are the several posters in the room? You’re a fan of B-movies or so?

I was watching an episode of “The Punisher” (quite boring, too many speeches and just a few nice fights) and forgot to turn off the TV while taking the pic, sorry. I like cinema very much, I’m a fan of “B-movies” but most of all I’m a fan of old movie posters. My favorite is the “Mimì metallurgico ferito nell’onore” one that i had it signed by Lina Wertmüller herself. 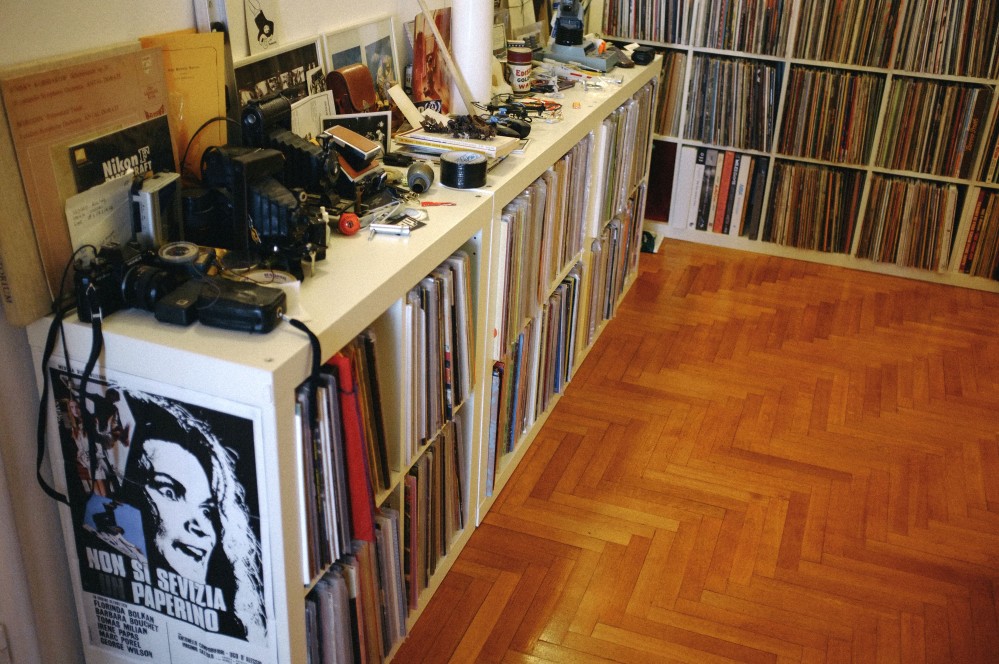 Cool, I see… you don’t have to be sorry! It was nice to peek also on what you were watching on TV. By the way, getting back to politics, I somehow agree with what you say that nowadays there’s not much to joke about being extreme right or so… but I also noticed very ‘light’ stuff among your records: not far from Godflesh there is a sort of box called “SugarSugar”. What is it? I’m also happy to see the lounge masterpiece “The K&D Sessions” from Kruder and Dorfmeister close to a “Satie Slowly” that arouse my curiosity a lot…

“Sugar Sugar” is not far from Godflesh just because my CDs (and LPs) aren’t in order and my collection is a total mess. That’s a shitty compilation about “The Birth of Bubblegum Pop” with hits by Jackson 5, Archies, Mungo Jerry, etc. It was a present, probably on that shelf unplayed since it came home. “K&D Sessions” was the sound of my early 00s, I remember spending hours at a friend’s place listening to a *rare* cdr copy of it. Do you remember when only a few people had a CD burner and we used to pay actual money to have a CD copied? Regarding “Satie Slowly”, it’s one of the most listened ones in my collection, especially by night: Satie classics played by Philip Corner sooooo slow and sooooo meditative. Give it a listen, you’ll fall in love.

Thanks, I’ve checked it out. Nice stuff, even if too close to the ‘original one’ from Satie maybe for my tastes in this period. I’m in a more ‘pop’ phase maybe of my life… So what are these puppets on the top of the LP area, with an (unusued I guess) guitar? I also like the wrestling mask in the center. Are you a wrestler, like the guy of the Haters, GX-Juppiter Larsen? I even discovered this: “Wrestling has always been a source of inspiration for them. Wrestling is the purest form of theatre of the absurd; one of non-confrontational violence where stereotypes are exaggerated beyond all recognition.[3] Since its premiere in early 1999, GX’s Untitled Title Belt has become a main sound source both on stage and in the studio. Just by looking at this belt, one would not necessarily be able to tell that this implement is a combination microphone, distortion-pedal, and noise generator. It was fashioned after the traditional championship wrestling belt.” [source: Wikipedia – https://en.wikipedia.org/wiki/The_Haters – December 2017]

Those puppets are a Christmas present from my parents: year after year it became more and more difficult to find a present for me, so a few years ago year they had found those weird mid 50s puppets in an antique store and got them for me. I kind of like them even if they’re slightly creepy.
The mask is a present that my friend Anna brought me from Mexico: its the Blue Demon mask, the legendary luchador. I’m a fan of wrestling (and lucha libre, of course) as well! On those shelves you might be able to see a nice book about lucha libre too. I knew that Haters used to wear wrestling masks but I didn’t know about the belt thing, cool!. Cock E.S.P. too used to wrestle and fight during their shows, watch a video of one their performances on youtube, if you can, such an amazing act (and great band)!

Ah! I nearly forgot… The guitar case contains a cheap Epi SG that needs to be serviced (the neck is slightly bent) but I don’t feel like paying a technician more that the value of the guitar itself. 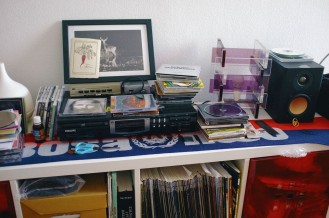 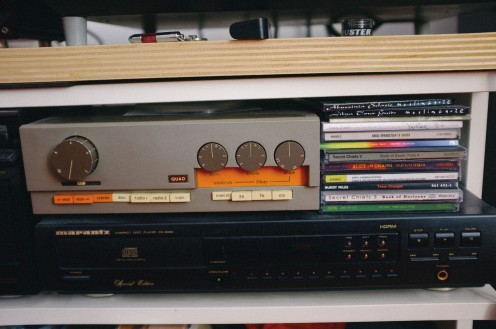